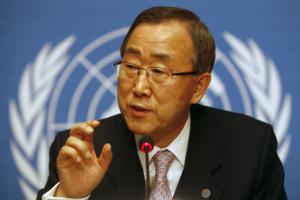 Secretary-General Ban Ki-moon has urged countries not to waver in their commitments to women and girls in the midst of the ongoing economic crisis, particularly in ensuring their basic human rights.

In his report on the girl child, Mr. Ban noted that economic crises can exacerbate the impacts of poverty on the lives of children, particularly girls, who are highly vulnerable to their negative effects.

In previous financial and economic crises, such as those in Asia and Latin America during the 1980s and 1990s, child mortality rates rose and school enrolment dropped. Past crises have also witnessed higher levels of crime and violence, child labour and other forms of hazardous work, including sex work, and infants being placed in institutions.

Already limited legal benefits and protection, lack of decision-making authority and limited control over financial resources are likely to leave girls and women even more vulnerable to the impact of crises than boys and men, ” he wrote

The Secretary-General said investing in and ensuring human rights for girls and women is not only a legal and moral obligation but is also likely to prevent intergenerational cycles of poverty and yield high economic and societal returns.

Maintaining national commitments to children and women and enhancing social protection will not only help to ensure a more rapid recovery from the crisis but will also build a foundation for equitable growth and sustained progress towards the Millennium Development Goals (MDGs), ” he added, referring to the set of globally agreed targets reduce poverty, hunger and other ills by 2015.

Mr. Ban`s wide-ranging report also addressed progress and challenges regarding discrimination against the girl child, including in the areas of the right to education, health and adequate food, HIV and AIDS, and violence and exploitation.

In addition, it highlights efforts undertaken to end female genital mutilation, a harmful practice that three million girls and women endure each year. The procedure is the partial or total removal of the external genitalia ” undertaken for cultural or other non-medical reasons ” often causing severe pain and sometimes resulting in prolonged bleeding, infection, infertility and even death.

According to the UN Children`s Fund (UNICEF), although the practice is in decline, it remains prevalent in many countries and often against national laws, particularly in Africa and the Middle East.

Mr. Ban stated that ending this practice will contribute to achieving the MDGs, including promoting gender equality and empowerment of women, reducing child mortality and improving maternal health.

In February 2008, 10 entities within the UN launched the Inter-agency Statement, setting out the elements to support the overall abandonment of this practice in one generation, with demonstrated success in many countries by 2015. This goal can be reached with strengthened support and collaboration, said Mr. Ban.