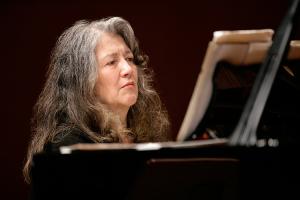 Nobel Media, in association with the Stockholm Concert Hall, is proud to present this year’s Nobel Prize Concert – an event of world class stature. The concert is to take place on 8 December as part of the official Nobel Week programme of activities. Tickets will be released to the general public on Friday 29 May.

Martha Argerich, headstrong, charismatic and technically brilliant pianist, is this year’s soloist at the Nobel Prize Concert. Yuri Temirkanov, Music Director and Principal Conductor for the Saint Petersburg Philharmonic will be leading the Royal Stockholm Philharmonic Orchestra. The programme comprises Ravel’s Piano Concerto in G major and Prokoviev’s Suite from Romeo and Juliet.

Martha Argerich was born in Buenos Aires in 1941, and had her performing debut at the tender age of eight. Her breakthrough came in 1965, when she won the prestigious Chopin Competition in Warsaw. She has worked with most of the world’s leading conductors, and her repertoire includes Bach, Schumann, Liszt, Debussy, Ravel, Bartók and Prokoviev.

Ms Argerich is passionate about supporting young talent. The year 1999 saw the first International Martha Argerich Piano Contest in Buenos Aires, a competition that she founded and of which she is now the chief judge. She has also instituted the Martha Argerich Music Festival in Japan, with concerts and masterclasses.

The Nobel Prize Concert is held to honour the year’s Nobel Laureates, who attend with their respective parties. Also present are members of the Swedish Royal Family and guests of the Nobel Foundation.

Tickets are available to the public. Ticket prices range from SKr 690 to SKr 1,390, which includes a printed programme and a glass of champagne in the intermission.

The Nobel Prize Concert is sponsored by DnB NOR and Statkraft.