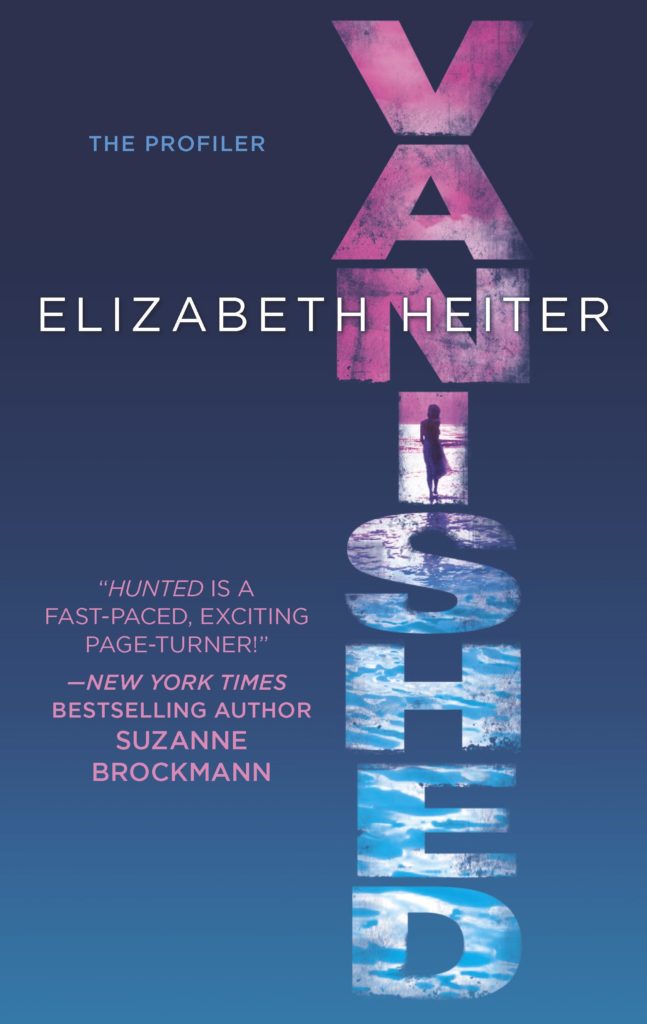 “Want to read a top-rate thriller?  VANISHED had me turning page after page. Wow. When you talk about our most-promising new thriller writers, put Elizabeth Heiter on the list!”

“Gripping from the first page, Vanished will keep you on the edge of your seat all the way to its searing conclusion. Heiter has given us a roller coaster of a thriller, sure, but this novel is also a rich and harrowing story of the psychology of evil and those who strive to stop it, insights that will stay with you long after you’ve finished the book. And what a heroine we have in Evelyn Baine!”

Lauded by critics for her debut novel Hunted; the first installment of The Profiler series, Daphne Du Maurier award finalistElizabethHeiter is really making a mark for herself in the mystery world.  Suspense Magazine noted “Heiter … provides a fascinating insight into the minds of killers and has created well-developed characters and a gripping story” while BookReporter praised Heiter for hitting a “high note right at the start of her writing career.” Taking readers once again into the mind of gutsy, resourceful, and tenacious FBI profiler Evelyn Baine who New York Times bestselling authorTess Gerritsen calls “a sharp and gutsy heroine you’ll want to follow for many books to come”, Heiter returns this January with VANISHED(MIRA Books, January 2015, $7.99 U.S./$8.99 CAN.), the haunting second novel in her gritty heroine-led FBI thriller series.  This time around, Baine has been trying to escape the painful memories of Rose Bay, South Carolina, her childhood home where tragedy struck, but now she’s back and she won’t stop until she catches the Nursery Rhyme Killer.

Almost two decades ago a madman stalked a small town in South Carolina, kidnapping little girls and leaving nursery rhymes behind to taunt their parents and the authorities. The final child taken was Cassie Byers, the best friend of Evelyn Baine. The nursery rhyme left at that scene indicated Evelyn was also an intended victim. Now, after all these years of silence, another girl has gone missing in South Carolina, and The Nursery Rhyme Killer is taking credit,  and the one girl he failed to snatch, Evelyn Baine, is the lead profiler on the case.   But is Cassie’s abductor really back or is there a copycat at work?

Elizabeth Heiter likes her suspense to feature strong heroines, chilling villains, psychological twists and a little bit of romance. Her research has taken her into the minds of serial killers, through murder investigations and onto the FBI Academy’s shooting range.