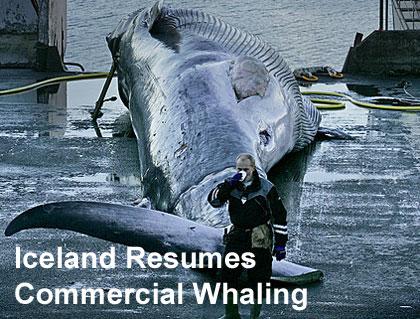 If tourists would not eat whale meat in Iceland any more, the hunting of minke whales would no longer be profitable and would have to be adjusted. Therefrom the German dolphin and whale conservation society ProWal is sure. ProWal intervented with the Icelandic government against the world’s outlaw commercial whaling before the 64th Meeting of the International Whaling Commission (IWC), dated 2th of to 6th July in Panama City takes place.

Andreas Morlok, CEO of ProWal: “The fact is that the demand of Icelander is not so large for whale meat, as the interest of tourists to try whale meat once! Numerous restaurants offer whale meat in Iceland of minke whales. Roasted whale meat is offered as a menu for about € 25 and raw in sushi pieces from just € 240. Even though they offer in ten supermarket chains whale meat in Iceland, it turns out there as a dead article in spite of a massive marketing campaign for a survey, 86 % of Icelanders in the last 12 months, bought no more whale meat. We met many Icelanders who hadn’t either never or only once in their lifetime tasted whale. The taste of whale meat is too oily, even if you before immerse the meat into milk to pull the fat from the meat. According to current estimates, nowadays the consumption of whale meat in Iceland is approximately 80 % of tourists and just about 20 % of the Icelanders themselves.”

According to ProWal Icelanders today hunt only two species of whales for purely commercial reasons. The fin whales, which are classified as endangered are caught for export to Japan. The meat of fin whales is not sold in Iceland. The government approved this year, a quota of 150 animals. Minke whales are even hunted for the Icelandic market near the area where tourists watch live whales at the whale watching. The minke whale catch quota is approved for this year 216 animals. The minke whales meat is sold only in Iceland and not exported cause the Japanese were not interested because of the high contamination with environmental pollutants of this whale species.

Andreas Morlok: “It is beautifully that the two whaling ships, which are specialized for hunting fin whales remain this year in the port of Reykjavik. How the two workers on board of the ships told us, after the tsunami disaster the Japanese, don’t have money to buy fin whale meat from the Icelanders. Since Japan itself sits for years on a mountain of several thousand tons of frozen whale meat, and despite a series of auctions to find buyers hardly the Icelandic hunt probably has no longer economic future for fin whales. We would appreciate it, when visiting tourists don`t taste whale meat. Not the Icelandic government and the International Whaling Commission, but the visitors of Iceland themselves are the key to whether the hunting of minke whales will continue or be finished.

The animal rights activists of ProWal cover the illegal trade of dolphin meat in Iceland.

Andreas Morlok: “We now have confirmation that Iceland alongside the Ukraine and the Faroe Islands is the third country in Europe where the dolphins are still get eaten. We were very stunned when we found out that dolphins are eaten also in Iceland! When dolphins were catch in the nets and die, the fishermen have the right to use and exploit the animals for self usage, even to eat. This arrangement arouses suspicion, because a fisherman and his family can’t eat the whole meat of a dolphin for its own. In Iceland there is a black market for dolphin meat! The sale of dolphin meat is indeed illegal and is punishable, but it is common practice! During our visit to the Icelandic Ministry of Fisheries and Agriculture in Reykjavik, which is responsible for the Icelandic whaling, we met Valdimar Halldórsson of the Ministry, who confirmed to us that there is actually a black market for dolphin meat in Iceland. Halldórsson commented on with this words: “Of course, it is not legally, but you know, we Icelanders are a big family and if you would offer me dolphin meat, I would not hesitate to buy this. My father was a fisherman and dolphin meat tastes excellent after all.”

Please visit the website of ProWal where you find a detailed report on the topical ProWal investigation on commercial whaling in Iceland: http://www.walschutzaktionen.de/1633101.html