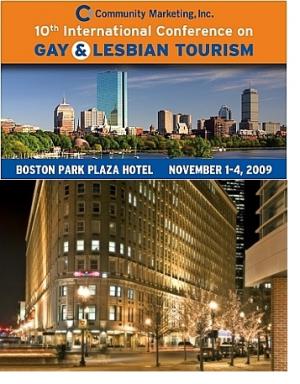 Community Marketing, Inc., (CMI) the San Francisco-based LGBT research and communications firm, surveyed over 5,000 LGBT consumers about their past year travel patterns and future plans in its 14th Annual Gay & Lesbian Tourism Study, the largest study of its kind. CMI will release full the results of the survey at the International Conference on Gay & Lesbian Tourism, Boston, Nov 1-4. Information about CMI’s proprietary survey panel and research methodology can be found here.

The tourism industry’s longest-running and most representative survey on LGBT (lesbian, gay, bisexual, transgender) travel indicates growth opportunities for destinations and hotels to market themselves regionally for “staycations.” The survey found tremendous growth in regional vacations over the past 12 months, but the growth was most pronounced to destinations that were drives of two to six hours away from home. The study also found small increases for vacations within the travelers’ own cities.

When asked to specify how many regional drive vacations (including at least one night in a hotel) were taken, 65% took a longer regional drive vacation of more than two hours, with 42% took a regional drive vacation where the drive was two hours or less, and 14% took a trip where they stayed in a hotel in their own city. This trend should benefit resort destinations like Palm Springs that are close (but not too close) to major metropolitan populations, and major cities like Boston, New York, Philadelphia and Washington DC, which are all close to each other, trading stays amon
g LGBT residents. “Gay and lesbian staycations ought to be a focus for tourism offices and hotels looking to make up for decreased long-distance arrivals,” said Thomas Roth, president of Community Marketing.

Overall, LGBT leisure travel was only slightly down over the past 12 months, but held reasonably steady despite the recession. “Less affected by economic downturns than their mainstream counterparts because the majority are dual-income-no-kids consumers, LGBT leisure travelers remain a important niche market for tourism and hospitality,” Roth said. However, business travel among gay men and lesbians saw substantive decreases, mirroring trends in the mainstream business travel market.

Other topics covered in this year’s study are comparisons of past year’s visits with next year’s plans, types of vacations, motivations for travel, research and purchasing resources, and more. To obtain a complimentary copy of the 14th Annual Gay & Lesbian Tourism Study abstract when released in November, please sign up for CMI’s email announcements.