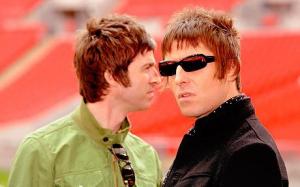 Famed Brit-pop band Oasis has split up on this, their fifteenth year, in the music business. Touted by Rollingstone magazine as the ‘second-coming of the Beatles’, Liam and Noel Gallagher’s debut album in 1994, Definitely Maybe, succeeded in turning the UK, and eventually, the rest of the world, on its heels. Despite much controversy throughout the group’s career, Oasis remained a solid, respected, rock n’ roll icon. As reported by the BBC, Noel Gallagher left Oasis prior to a scheduled appearance at a French music festival last weekend, and the remainder of their European tour has since been canceled.

Though the 90s revealed many talented rock groups whose hit singles evoked a blast from the past, some would say today’s retro is just piggy-backing off of someone’s else’s ingenuity. How can we draw the line between the homage and flattery of a remake, and plain old lack of talent? A few recent R&B songs are called to mind, whose so-called ‘hits’ now monopolizing radio waves, are near-exact copies of some influential 80s talent such as Pat Benetar and Toto – dare I say, weaker in their modernization. There is a big difference between recalling an era through similar sound and overall theme, such as the B-52s so successfully did with Love Shack, and Dee-Lite with Groove is in the Heart, as opposed to a literal inclusion of a famous backtrack that anyone would immediately recognize as a blatant remake.

More and more aging stars securing their post-retirement by selling the rights to their 70s and 80s hits – or coming out of retirement for one last big tour – makes sense, but what does it mean for the future of the industry when ‘old guys’ are rocking it out on stage better than those some 50 years their junior? The more pressing question is: why aren’t more young bands out there creating original material and developing their own unique flavour, just as Oasis so cleverly did in their re-interpretation and integration of old standard sounds into their modern tunes?

The answer is this: only a handful of kids today can truly duke it out with the timeless talent of yesteryear. And, unfortunately, the rest we have to see on reality TV, talentless wannabes belting out historically important songs off-key or twisting classic compositions to suit their limited vocal range…all in the name of providing something for lazy consumers to watch or listen to. It used to be that true talent was discovered, not moulded by egotistical television producers with too much time and money on their hands and a need to fill that primetime slot. Perhaps sitcom and mini-series producers are to blame for not being able to provide something more diverse to watch besides atypical nuclear family scenarios and glorified phorenzic science/autopsies.

ACDC is ‘back in black’, currently on tour promoting its latest album Black Ice and of course, its well-known hard rock hits. Still strutting across the pyrotechnic-lit stage in a leather vest and biker hat, Brian Johnson’s unmistakable voice continues to please adoring fans young and old alike. How Angus Young is able to muster up enough energy to do a more than twenty minute guitar solo some 35 years after the band’s inception is a feat in itself! These older men seem to be part of a trend among their generation because up next on tour is KISS, still dressed up as goblins, Gene Simmons still head of the clan now well into their 60s. Who knew that his ‘Family Jewels’ reality TV series would be a hit, moreso with youngsters than with those of his own generation? What it lacks in profound content, it possesses in originality.

Slightly younger and more serious death metal band, Metallica, have similarly followed suit, coming out of – what seemed to fans as – semi-retirement to rock the stage in their first world tour in five years promoting their new album Death Magnetic. Shrouded in controversy at the onset of the new millennium by filing a lawsuit against Napster for royalty-free downloads, litigious Metallica redeemed themselves as one of thrash metal’s ‘big four’ alongside Anthrax, Slayer and Megadeath by collaborating with the popular virtual game, Guitar Hero. This led to the latest release of the game in their honour, Guitar Hero: Metallica, this year.

Even U2, thought to have gone on its final tour in 2004 with the release of How to Dismantle and Atomic Bomb is back with a heavy schedule to promote No Line on the Horizon, released earlier this year. Reaching the pinnacle of its success in the late 80s, U2 has continued to modify its style over the past two decades without compromising that familiar sound loved by fans the world over. On its initial discovery as a band worth following, and its subsequent rapid and unexpected fame, bassist, Edge, once said,  “(…) realizing that actually not knowing how to play was not a problem… music was more about energy and trying to say something and not necessarily about great musicianship.”

Perhaps these rock groups had the secret all along: passion, not composition or contrived lyric, makes a hit song. All this to say that on any given Saturday night, any bar not specializing in techno or pop music will be blasting, first and foremost, hits by the aforementioned groups (with the occasional Nickelback thrown in for good measure). The new wave of so-called rock music includes The Killers, Sum 41, Daughtry and newcomer Kings of Leon. While legitimate due in part to talented vocals, interesting melody or somewhat unique theme or lyrics, nary a one can boast the undeniable ‘catchiness’ of their forerunners.

Of course, genres come and go and it may just be the ‘Broadway musical revival/teen idol/female faux-punk’ genre ruling the airwaves right now, but I assure you never in recent history has there been an attendance so varied in age, and so willing to  get into the music, as at the ACDC concert on Magnetic Hill in Moncton, New Brunswick last month. With over 80,000 tickets sold, fans as young as fifteen donned flashing devil horns, and as old as the band members’ peer age-group arrived on site with gusto – anxious to see their newly discovered (or old familiar) friends in action yet again! The only other star to garner that kind of attendance in 2009 was Michael Jackson…but posthumously, at his memorial in Staples Center, L.A.

So what is it about seemingly silly, uncomplicated songs like ‘Hell’s Bells’ and ‘You shook me all night long’ that keeps people tapping their feet and bopping their heads at every bar in every town? On favourite bands, the average, mainstream teenaged boy in 2009 would most likely respond something classic rock such as ACDC, The Rolling Stones or Pink Floyd. And maybe, just maybe, you too want to settle into something comfortable that ‘takes you back’ while you slowly peel the label off of your ice-cold beer, wrap yourself up in the melody, not struggling to figure out the meaning behind the lyrics to ‘Wonderwall’.