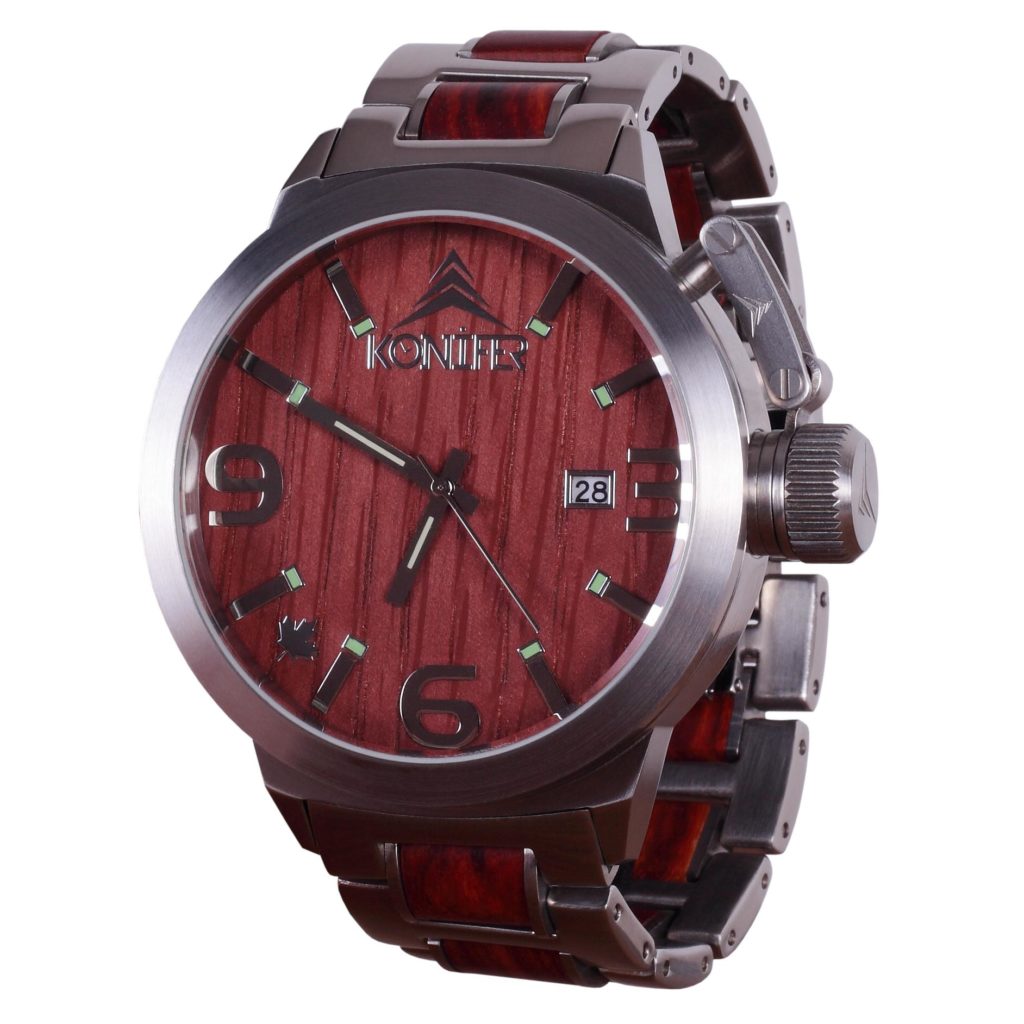 With the Kickstarter global community, Konifer planned to raise $15,000. They received an enthusiastic response from contributors and within nine hours, generated $15,000 and by now have passed the 300% mark. Currently with 375 contributors, a total of $51,166 and 18 days until campaign close, Konifer can easily reach 1000% over its initial goal of $15,000. Its success symbolizes one of the most supported Kickstarter campaigns in Canada’s history.

As a token of appreciation, backers of $159 and plus receive a watch of their choice at no added cost. The MSRP for the watch is 295$.

In addition, the backers will also receive a free luxury bamboo storage case and a commemorative back case with engraved writing recognizing the recipient as a Kickstarter campaign founder. In the Fall of 2016, the Konifer website will offer watch customization for customers.

Customers are able to decide between 5 different hard wood sources: maple, sandalwood, green sandalwood, black sandalwood, zebrawood, and mahogany. They can than select a stainless steel or black matte finish. The stainless steel is the best market option known as stainless 316L ensuring a pristine appearance and long-lasting durability.

Updated designs will be announced when different funding thresholds are achieved. As of now, a wide array of watches varying in style and color are available along with watches for both men and women.

Their chosen material demonstrates a commitment for environmental sustainability and is reflected in company policies. For every watch sold, a tree is planted by WeForest NPO. According to Max Clément, “[This is] our way to be involved and [to contribute eco-friendly solutions for] earth.”

Founding president of Konifer Watch, CEO and designer, Max Clément, launched a Kickstarter campaign to finance a new startup. He envisioned creating a unique watch using wood and metal that would effectively blend classic with contemporary. It became an immediate success and within 30 hours of launching, they not only met their funding goal but raised more than double the original amount, with a steady climb.

For as long as he could remember, Clément has had a passion for natural resources. Coming from a long line of lumber workers and foresters, wood has been a central component to his way of life. Clément’s meticulous approach with crafting his woodwork is harnessed in every watch making it figuratively and quite literally second nature.

Since 2013, Konifer Watch has specialized its design with a focus on wooden watches and accessory sales. The company is known for offering sophisticated, unique and affordable products. Moreover, Konifer Watch is an environmentally conscious choice that aims to serve quality watches with unparalleled appeal. The company prides itself in making the world’s best wooden watches.

Kickstarter gives the opportunity for web users to finance their projects via crowdfunding. This has granted startup entrepreneurs to benefit from a non-traditional investment approach. Entrepreneurs only receive the funds if they reach or surpass their financing goal, which is established at the beginning of the campaign.

Support the project on KickStarter