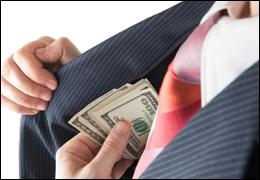 The former president of a Houston hospital, his son and a co-conspirator were sentenced today to 45 years, 20 years and 12 years in prison, respectively, for their roles in a $158 million Medicare fraud scheme.

“The former President of Houston’s Riverside hospital, his son and their co-conspirators saw mentally ill, elderly and disabled Medicare beneficiaries as commodities to be turned into profit centers – not as vulnerable individuals in need of health care,” said Assistant Attorney General Caldwell.  “Rather than providing needed medical care to a historically underserved community, the defendants ran a longstanding hospital into the ground through their greed and fraud.  According to the evidence presented at trial, the defendants had patients sit around the facility watching movies while they received no treatment.  Meanwhile, the defendants billed Medicare more than $158 million for care that was never provided.  This brazen fraud cannot and will not be tolerated.”

According to evidence presented at trial, from 2005 until June 2012, the defendants and others engaged in a scheme to defraud Medicare by submitting to Medicare, through Riverside and its satellite locations, approximately $158 million in false and fraudulent claims for partial hospitalization program (PHP) services.  A PHP is a form of intensive outpatient treatment for severe mental illness.

To date, six other individuals either have pleaded guilty based on their involvement in the scheme.  Mohammad Khan, an assistant administrator at Riverside, who managed many of the hospital’s PHPs, pleaded guilty to conspiracy to commit health care fraud, conspiracy to defraud the United States and to pay illegal kickbacks, and five counts of paying illegal kickbacks; on May 21, 2015, Mohammad Khan was sentenced by U.S. District Judge Sim Lake of the Southern District of Texas to 40 years in prison for his role in the scheme.  William Bullock, an operator of a Riverside satellite location, as well as Leslie Clark, Robert Ferguson, Waddie McDuffie and Sharonda Holmes, who were involved in paying or receiving kickbacks, also have pleaded guilty to participating in the scheme and await sentencing.

The case was investigated by the FBI, IRS-CI, Texas MFCU, HHS-OIG, RRB-OIG and OPM-OIG.  The case was brought as part of the Medicare Fraud Strike Force, under the supervision of the Criminal Division’s Fraud Section and the U.S. Attorney’s Office of the Southern District of Texas.  The case is being prosecuted by Assistant Chiefs Laura M.K. Cordova and Jennifer L. Saulino and Trial Attorney Ashlee C. McFarlane of the Criminal Division’s Fraud Section.

Since its inception in March 2007, the Medicare Fraud Strike Force, now operating in nine cities across the country, has charged nearly 2,100 defendants who collectively have billed the Medicare program for more than $6.5 billion.  In addition, the HHS Centers for Medicare & Medicaid Services, working in conjunction with the HHS-OIG, are taking steps to increase accountability and decrease the presence of fraudulent providers.

To learn more about the Health Care Fraud Prevention and Enforcement Team (HEAT), go to: www.stopmedicarefraud.gov.