Government Challenge: Petition – What is definition of healthy? Mainly Junk Food or Vegan? 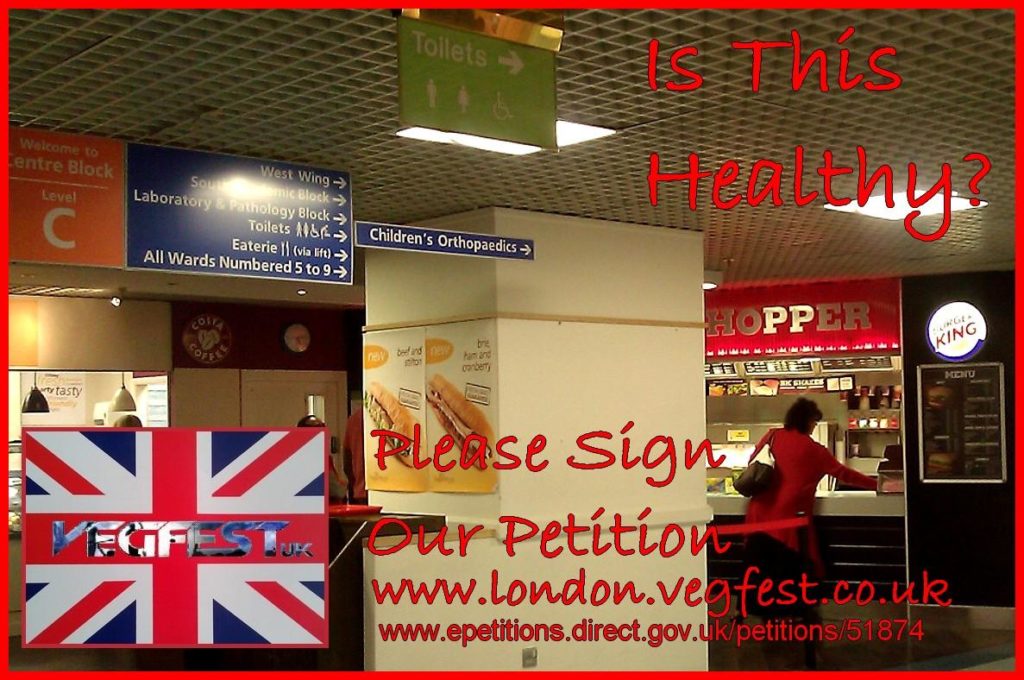 VegfestUK has been campaigning for a healthier, more ethical and sustainable UK for over 10 years now. Through VegfestUK festivals in London, Brighton and Bristol, the 10th Anniversary VegfestUK Awards and the 10th Anniversary Healthy Vegan Recipe Competition ,  Vegfest UK continues to make a difference to thousands of people’s lives. However they say there’s more to be done.

VegfestUK Director, Tim Barford (winner of a 2013 PEA award ) says “Whist people and animals are suffering and dying unnecessarily just because of the human predilection for animal foods and sugar, and whilst the planet’s delicate environmental balance is under threat, we cannot stop campaigning . It would be irresponsible to stop”

The Vegfest UK consultant nutritionist Yvonne Bishop-Weston from Foods for Life Nutrition and Health is working with Vegfest UK  to address a problem that personifies a key underlying cultural issue in Britain. It’s a problem that is relatively easy to fix (because technically it breaks trading standards law), but better than that provides a vehicle and platform  to raise the UK profile of a healthier, more ethical and sustainable vegan lifestyle that is the most obvious solution.


The Vegfest UK collective hope they can change the culture of apathy, ignorance and general contempt for vegetarian and vegan diets, even by some leading dieticians and nutritionists.

“Big companies routinely claim their junk food is healthy ‘as part of a balanced calorie controlled diet’. Some food manufacturers and caterers are going a step further , claiming a plate of chips and sausages is healthy if it has a portion of peas or beans with it. One national retailer is even advertising this type of food, served with chocolate ice cream and sugary drinks, as ‘healthy meals for kids’. Who can blame them, even the NHS cheerlead junk food by hosting Burger King restaurants in hospitals” points out Yvonne.

Generally the Government’s advice is to encourage ‘self-regulation’ and unfortunately there is a reticence amongst Trading Standards officers to tackle a national company rather than a local independent business.

Tim Barford director of VegfestUK  says “We came up with the idea of a petition to the Government because if we get 100,000 signatures then it has to be discussed in parliament. If a legal or advisory definition of ‘healthy’ gets discussed then they have to look at the research.  If they look at the research then it overwhelmingly points to a plant based diet”

Yvonne agrees, “The evidence on reducing the risks of preventative chronic disease clearly points to  a plant based diet but the Government experts need to work it out for themselves. Eventually, if they do it scientifically and factually, using the latest research, they’ll struggle not back themselves into a plant based corner. “