For the fourth year in a row, HugTrainUSA offers simple comforts to those who need them over the holiday season 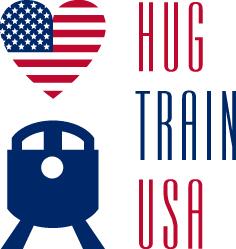 One man’s train journey around the United States aims to raise awareness of, and money to support people living with mental health issues, through the simple act of hugging – 21 December, 2012 – 7 January 2013

– Now in its fourth year, HugTrainUSA 2012-13 is a sustainable train journey around the United States over the holiday season, to help raise awareness of, and money for, mental health issues, at a time of year when so many struggle with loneliness and depression. The journey starts December 21 in New York and will end January 7, 2013 in Miami, Florida.

Before beginning his two-week nationwide trip, HugTrain founder Arié Moyal will stop in New York, NY on December 21 through 23rd, 2012 to visit with survivors of Hurricane Sandy, give out hugs and let them know they’re not forgotten. HugTrainUSA then kicks off a transcontinental US tour in Philadelphia, PA on 24 December, 2012 and concludes two weeks later in Miami on 7 January, 2013 (full itinerary below). In that time Arié will be making stops in various cities, offering hugs to anyone who wants them, and documenting the experience through an extensive social media narrative.

A simple hug has been found to bring down anxiety. Scientists have found that touch affects the cerebellar brain system, an area of the brain where basic positive emotions such as trust and affection come from. A hug can lift you up, bring a smile to your face and warmth to your heart. It’s friendlier than a handshake, and much less private than a kiss. A hug is something we can give and receive freely, no matter our age, gender or race.

“A hug is the simplest form of communication. It has no agenda or gender; a hug is a way of saying ‘I care about you’ and ‘I connect with you,’” says HugTrain founder Arié Moyal. “A hug is a simple act that can mean a lot to people. It’s important to remember that many people are struggling during the holidays, which is why HugTrainUSA makes its annual journey during this time of year.”

During his time on the train, Arié talks to as many people as he can, offering them a hug, lending them an ear and making connections with people. Some conversations last a few minutes, others hours or even days depending on the leg of the trip. Amtrak employees have come to know Arié and look forward to the HugTrainUSA voyage. Amtrak train attendant Tavares Booker has witnessed the power that a hug can deliver. “I personally appreciate [HugTrain] because it gives the passengers an opportunity to meet other individuals from different backgrounds or walks of life and feel like family while on board the train.”

This year’s trip is dedicated to the survivors and victims of the movie theatre shooting in Aurora, Colorado on 20 July 2012 and money raised by the trip will support The Brain and Behavior Research Fund (BBRF) and To Write Love on Her Arms.

Details on addresses and timings are available on our website at: http://hugtrain.org/itinerary

Sponsors include: Nokia, Manty Web Designs and Rush PR News with more to be announced soon!

People and companies interested in sponsoring HugTrainUSA can get in touch with Arié Moyal at the contact details below.

People can get involved with HugTrainUSA in the following ways:

•  Come out and hug or be hugged

•  Spread the word to your community

•  Ride along with HugTrain on Amtrak.