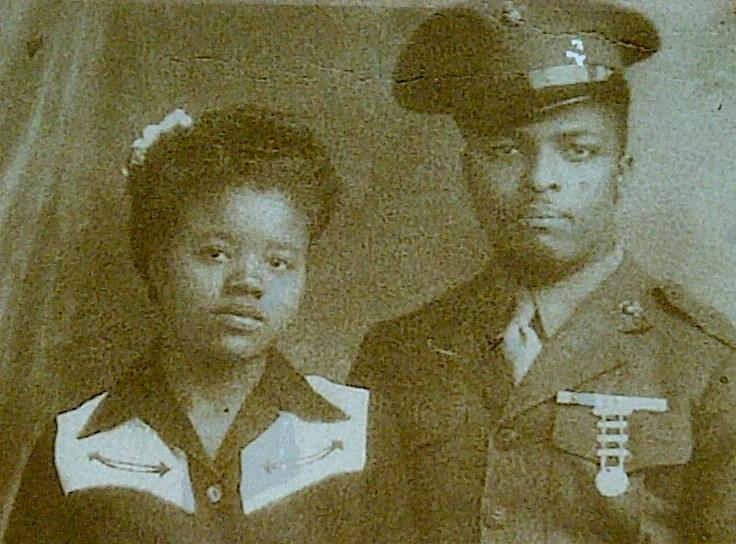 Moore, 87, faced racism, discrimination and segregation growing up in Aberdeen, Miss. and wanted no part of it, so he joined the U.S. Marine Corps. Little did he know that he would also face segregation and racism in the military.

He first volunteered when he was 17, but was too young, so he had to wait a year or so. “I was mad when the Japanese bombed Pearl Harbor and I wanted to do my part in fighting for my country. When I saw the sign ‘Uncle Sam wants you,’ I wanted Uncle Sam, also,” Moore said. Family members said the Marines taught him how to be a man and fight for himself and not to let anyone push him around, including white people.

“I was sent to Montford Point to train with other black Marines.  The Marines were a segregated service,” Moore said.  “The Marines taught me how to keep busy and how to use weapons and self-defense.”

Moore said the Marines also taught him “you can give in, but never give out.”  Moore served in the U.S. Marine Corps. from April 3,1943 until February 19,1946.  His first duty assignment was with the 44th Platoon, Camp Montford Point, N.C., as a Steward’s Assistant – First Class. He said he loved the Marines.

Moore, who currently lives in Ecorse, Mich., left the Marines and married Everlena Chandler. They have six children, 20 grandchildren, 27 great-grandchildren and 13 great-great- grandchildren. Moore retired in 1985 after 31 years working at the Ford Motor Company Rouge Engine Plant in Dearborn, Mich. as an inventory specialist.

Moore said the Ford Company was the only employer that let him know they appreciated his military service. Ford also awarded Moore four year’s seniority for his service in the military. He said some of the younger whites didn’t like that, but he was able to hold his own, due to his training with the Marines.

Prior to his retirement, Moore served with the Ecorse Auxiliary Police Force, was an officer in the Lion’s Club and helped start the 4100-17th Street Block Club in Ecorse using skills he said he learned from the Marines.

Moore’s family said he never talked much about his military experience with his children. He does, however, have a scar on the right side of his chin he received from a confrontation with a Japanese soldier that serves as a constant reminder. A Japanese soldier came up from behind Moore and cut him across the chin. A fellow marine, Oscar Posten, saw what was going on, came up from behind the enemy soldier and stabbed him in the back with the bayonet on his rifle. Moore’s life was sparred.

“I didn’t know I had been cut. Some of the other Marines saw all the blood and rushed me over to medics, where they sewed me up without anesthesia. I’ll never forget that. Had it been a little deeper, my jugular vein would have been cut,” Moore said.

But on this day, Moore, along with other surviving members of the Montford Point Marines, traveled to Washington, D.C., to collectively receive the Congressional Gold Medal. “Finally, after over 65 years, the country is paying tribute to our service. Many of my fellow Marines didn’t get to see this day,” he said.

Moore’s daughters, Theresa Tue, of Mantua, N.J. and Elaine Bullard of Texas City, Texas, said they are very proud of their father and his contributions to his country. “We’re glad the Montford Point Marines received this overdue honor for what they endured and achieved. We’re also glad that our father is now sharing his military experience with his family,” Tue and Bullard said.

Rush Moore wasn’t notified that the Montford Point Marines were receiving the Congressional Gold Medal.  A neighbor happened to mention it to him, and Moore’s son contacted the Montford Point’s Marine Association for information and specifics about the award ceremony.

The trip to Washington, D.C. was difficult. Moore is not in the best of health these days and requires the use of a cane or walker to get around. Never the less, Moore said he was determined to be in the Emancipation Hall of the Capitol Visitor Center along with his fellow Montford Point Marines. He flew from Detroit Metropolitan Airport, accompanied by his son, Rush Moore Jr.

After arriving at the hotel in Arlington, Va., he attended a Meet and Greet reception looking for fellow Marines with whom he served. While Moore said he didn’t recognize anyone, he did meet other Montford Point Marines, and was able to share his story and experiences.

During the ceremony, there was a visible tear in Moore’s eyes as the Medal was presented in honor of this outstanding group of Americans. “This trip was well worth it. I will cherish the bronze replica of the Congressional Gold Medal. As the saying goes, better late than never,” he said.

Unfortunately, Moore has misplaced his original Release from Active Duty Discharge certificate.  When he requested a replacement, he received an abbreviated certificate that does not provide information on where he served or the medals he was awarded. Moore believes that the Marines failed to award him a Purple Heart for injuries incurred during combat because he can’t recall ever receiving the award.

Today, Moore loves to play cards, especially bid whist, which he plays with other retirees at UAW Local 600. Family members said he and Everlena once did a lot of traveling until health problems prevented them from doing so, but when the pair visited Mount Rushmore, S.D., the city made Moore feel like he was the mayor.

Another moment in history that Moore was moved by was the election of President Barack Obama. “My dad has always said ‘I never thought I would live to see a black president voted in during my life time,’ so that was truly a moment of honor,” Tue said of her father.

This writer met Rush Moore Sr. more than 55 years ago, as a young kid. Our families attended the same church. He was a devout member of the church.  However, he never exhibited any signs that he had served in the military. Moore is a Christian man and a caring father. He is also a hero, along with the other men who proudly served as the Montford Point Marines.

Farrell J. Chiles is an author/writer and specializes in African Americans in the military. He is a member of the Military Writers Society of America (MWSA). Chiles resides in Phillips Ranch, Calif. He can be reached at farrellchiles@yahoo.com