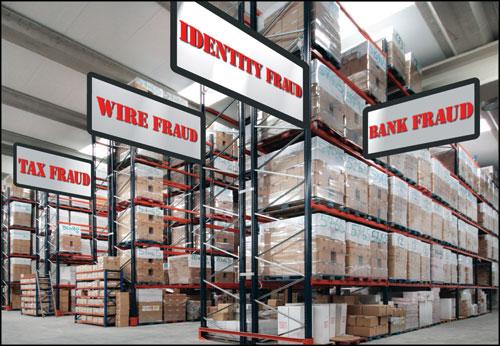 Park was arrested on Sept. 16, 2010, in a coordinated law enforcement takedown of 53 individuals in connection with widespread, sophisticated identity theft and fraud, including 43 other individuals charged along with Park with participating in one large-scale criminal enterprise. Yu was arrested and charged the next day.

“Today, ‘Jimmy’ Park admitted he ran an organization which obtained social security numbers through fraud, manufactured fake IDs, ripped off banks and retailers, and laundered a portion of millions in profits overseas,” said U.S. Attorney Fishman. “This criminal enterprise combined traditional identity theft with sophisticated credit card fraud, and dismantling it is a signal success in combating the emerging problem of international organized crime.” “Sang-Hyun ‘Jimmy’ Park was the head of a New Jersey crime conglomerate which advertised, facilitated, and supported a multitude of frauds resulting in staggering economic losses,” said Michael B. Ward, Special Agent In Charge of the FBI’s Newark Division. “Park and his cohorts supervised as willing participants obtained social security numbers with false identities, applied for out of state driver’s licenses utilizing these identities, quickly built fraudulent credit histories, and then opened bank and credit accounts.

Afterwards, Park and associates would commit various frauds with the assistance of collusive merchants and others steeped in white-collar crime. The criminal activity was sophisticated, and was designed to evade detection from law enforcement.” Both defendants pleaded guilty before U.S. Magistrate Judge Patty Shwartz in Newark federal court. According to documents filed in these cases and statements made in court: Sang-Hyun Park Sang-Hyun Park, a/k/a “Jimmy,” was the leader of a criminal organization (the ‘Park Criminal Enterprise”) headquartered in Bergen County, N.J., that obtained, brokered, and sold identity documents to customers for the purpose of committing credit card fraud, bank fraud and tax fraud. As part of the scheme, the Park Criminal Enterprise obtained Social Security cards beginning with the prefix “586.” Social Security cards with that prefix were issued by the United States to individuals, usually from China, who were employed in American territories, such as American Samoa, Guam, and Saipan.


The Park Criminal Enterprise sold the cards to its customers and then escorted the customers to various states to use them to obtain identification cards and driver’s licenses. The Park Criminal Enterprise then engaged in the fraudulent “build up” of credit scores associated with these fraudulently obtained identities. They did so by adding these identities as authorized users to the credit card accounts of various co-conspirators who received a fee for this service—members of the enterprise’s credit build up teams. By attaching the identities to these existing credit card accounts, the teams increased the credit scores associated with the identities to between 700 and 800. The members of the build up teams knew neither the real person to whom the identity belonged nor virtually any of the customers who had purchased the identities. After building the credit associated with these identities, Park and his co-conspirators directed, coached, and assisted his customers to open bank accounts and obtain credit cards. Park and his co-conspirators then used these accounts and credit cards to commit fraud. In particular, Park relied on several collusive merchants who possessed credit card processing, or swipe, machines. For a fee, known as a “kkang fee,” these collusive merchants charged the fraudulently obtained credit cards, although no transaction took place. After receiving the money into their merchant accounts from the credit card elated to these fraudulent transactions, the collusive merchants gave the money to Park and his co-conspirators, minus their “kkang fee.”

Among other things, Park admitted that he operated the criminal enterprise out of several offices in Bergen County, N.J., ran advertisements in local newspapers to attract customers interested in his illegal services, met with customers and other co-conspirators and otherwise directed the activities of the criminal enterprise. He also admitted that he obtained and sold 586 social security cards to his customers and members of his criminal enterprise escorted more than 100 customers to various states so they could fraudulently obtain identification cards and driver’s licenses using the 586 Social Security cards and other fraudulent documents—such as counterfeit Chinese passports. Park also admitted he conspired with and paid cash to various “build up teams,” which included Yu, to build the credit scores and establish credit histories for the fraudulent identities that he had sold to his customers. Park also told Judge Shwartz he laundered portions of the money he obtained through the fraud by wiring the money to various accounts in South Korea. In total, Park defrauded various credit card companies, banks, and lenders out of approximately $4 million.

To obtain these commercial loans, Yu and his co- conspirators submitted false loan applications and supporting documents to a lender.

The vast majority of these loans defaulted, resulting in significant losses to the lender. Yu also admitted that between 2006 and January 2009, he conspired with others to obtain hundreds of thousands of dollars in personal business loans for unqualified borrowers. In furtherance of this conspiracy, Yu and a co-conspirator manufactured false tax returns and W-2 forms and submitted them with bogus loans applications to lenders.

The vast majority of these loans defaulted, resulting in significant losses to the lenders. Finally, Yu admitted that he conspired with Park and others by fraudulently building credit scores for Park’s customers who were using 586 identities.

Yu acknowledged that he received approximately $500 in cash for each identity he added to his accounts. In total, Yu and his co-conspirators caused in excess of $2.5 million in losses to banks, credit card companies, and other lenders.

The government is represented by Assistant U.S. Attorneys Barbara R. Llanes of the U.S. Attorney’s Office Criminal Division and Anthony Moscato of the Office’s Organized Crime/Gangs Unit in Newark. Numerous members of the Park Criminal Enterprise have pleaded guilty to various offenses in support of the enterprise’s fraudulent schemes.

As for the defendants with pending charges, the charges and allegations contained in the charging documents against them are merely accusations, and the defendants are considered innocent unless and until proven guilty.

How it all started

They hijacked identities on the other side of the globe…faked drivers’ licenses and other documents…built bogus credit histories and boosted the scores in clever ways…then used it all to open bank accounts and credit lines they could loot at will.

In the end, they created what our Newark Special Agent in Charge Mike Ward called a ‘crime superstore,’ a sophisticated way to rob financial institutions, retailers, car leasing companies, and even the IRS out of millions of dollars.

Following an undercover investigation led by the FBI and its partners, it all came crashing down in September 2010, when 43 members of the criminal ring were charged in this complex scheme. Another 10 individuals were charged for various related offenses at the same time during a coordinated takedown. And on Monday, the leader of the band of thieves—San-Hyun Park, known to his criminal colleagues as “Jimmy”—pled guilty in federal court in Newark.


The Park criminal enterprise started by stealing Social Security numbers from unsuspecting individuals—usually from China—who were employed in American territories in Asia like Saipan, Guam, and the Philippines. They then sold these identities to its customers in the U.S. for $5,000 to $7,000. Although the stolen identities were Chinese, the vast majority of Park’s customers were Korean-Americans. The ring would use the phony Social Security numbers to obtain authentic driver’s licenses, identification cards, and other identity documents from various states…or manufacture counterfeit licenses and other documentation.

Based in Bergen County, New Jersey, Park’s organization was subdivided into different cells, each with a unique role. First, there were the customers who paid Park and his co-conspirators for fake identity documents. Then, there were the brokers, suppliers, and manufacturers of the phony identity documents—like Social Security cards, immigration documents, and driver’s licenses.

A third group included merchants who colluded with the organization by knowingly swiping phony credit cards in return for a fee called a “kkang.” The credit card buildup teams made up the fourth group, fraudulently inflating credit scores to help open the bank and credit accounts.

The buildup teams would take one of the stolen Social Security numbers—and the Chinese identity attached to it—and add that person’s name as an authorized user to other co-conspirators’ credit card accounts. These co-conspirators, who knew their accounts were being used to commit fraud, received a fee for their service.

After the credit buildup was completed, the Park criminal enterprise conspired with its customers to use the fraudulent identities to apply for checking accounts, bank and retail credit cards, debit cards, lines of credit, and loans. Members of the criminal conspiracy used their sizeable proceeds to live large, buying such luxury items as fancy cars, expensive liquor, and designer shoes.

The multi-agency investigation made use of cooperating witnesses and an undercover federal agent, as well as court-authorized wiretaps, to record incriminating conversations among members of the crime ring and others. The FBI partnered with several federal agencies and local police departments in New Jersey, among others. We also worked cooperatively with the major banks, credit card companies, and department stores targeted by this criminal organization.