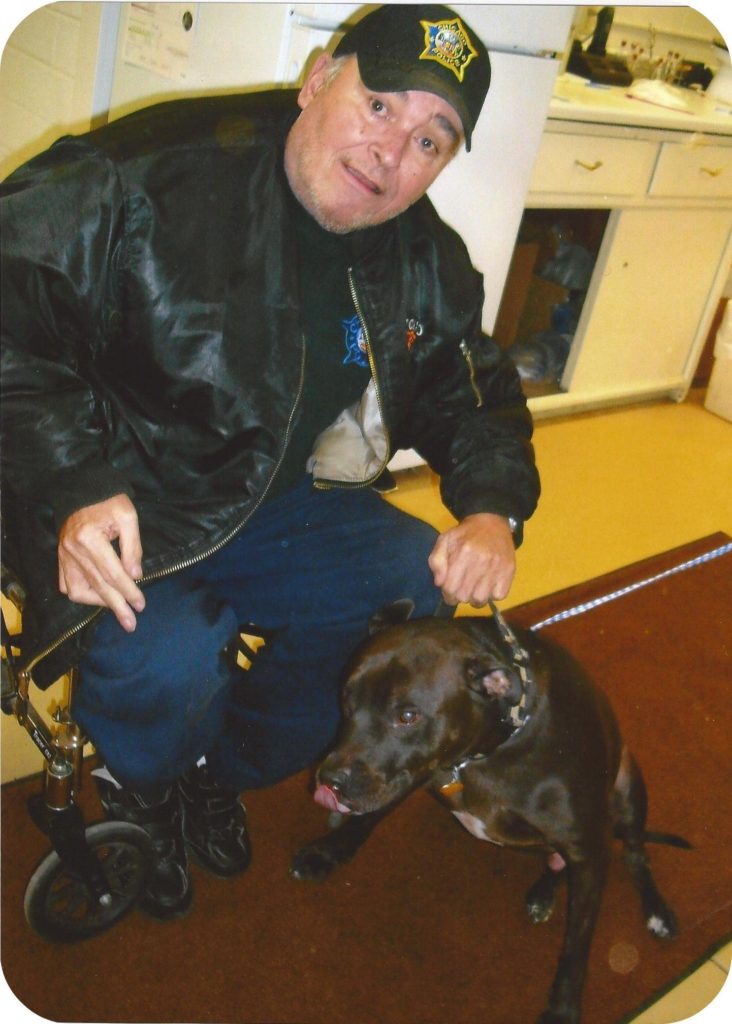 James Sak, 65, a disabled Vietnam Veteran and retired Chicago police officer, was forced to relinquish his service dog after the Aurelia Town Council voted December 14 to prohibit the dog, identified as a “pit bull,” from residing within Aurelia city limits. Although the City of Aurelia has breed-discriminatory laws prohibiting residents from owning “pit bulls,” the Council’s decision appears to violate 2010 guidance from the United States Department of Justice (DOJ) on breed limitations for service dogs (“Nondiscrimination on the Basis of Disability in State and Local Government Services”).


Sak and his wife, Peggy Leifer, moved to Aurelia in November to live near Leifer’s ailing mother, an 87-year-old longtime resident of Aurelia. Sak was accompanied by his service dog, Snickers, who is certified with the National Service Animal Registry. In 2008 Sak suffered a debilitating stroke that left him permanently disabled, unable to use the right side of his body, and confined to a wheelchair. For two years Sak worked with Aileen Eviota, a physical therapist with the University of Illinois Medical Center in Chicago, to improve his functional capabilities and live more independently through the use of a service dog. “Snickers has been individually trained to assist James with tasks which mitigate his disability, including walking, balance, and retrieving items around the house,” said Eviota in a letter to the Aurelia Town Council dated December 2, 2011.

Days after moving into their new home, Sak and Leifer were summoned to a Town Council meeting after a small group of citizens circulated a petition calling for the dog to be removed from city limits. Although the dog has no history of aggression or nuisance complaints, the petition urged the Council to “retain as written and without exception the existing City of Aurelia Ordinance, Chapter 58,” which prohibits ownership of “pit bull” dogs.

However, because Snickers works as a service animal for a disabled person, the dog is protected by the Americans with Disabilities Act (ADA) and should not be subject to the breed ban, according to 2010 guidance issued by the DOJ.

“The Department does not believe that it is either appropriate or consistent with the ADA to defer to local laws that prohibit certain breeds of dogs based on local concerns that these breeds may have a history of unprovoked aggression or attacks,” the DOJ stated in the regulation. “Such deference would have the effect of limiting the rights of persons with disabilities under the ADA who use certain service animals based on where they live rather than on whether the use of a particular animal poses a direct threat to the health and safety of others.”

On December 14 the Aurelia Town Council told Sak that he must remove his dog from city limits by the end of the day. Snickers is currently being boarded at facility outside of Aurelia.

“I lost my helper,” said Sak, who served more than 30 years in the Chicago Police Department and enlisted in the Army during the Vietnam War. “I’m not looking for special treatment, I just want to be safe, and I need my service dog for that.”

“Without the service dog here to assist, I can’t leave Jim unattended,” said Leifer. “But the whole reason we moved to Aurelia was to care for my 87-year-old mother who is ill. I drive across town to care for her three times a day. Jim has already fallen once and we had to call 911. I live in fear that he will have another stroke, or worse. We need his service dog back.”

Sak is a member of the Fraternal Order of Police – Chicago Lodge 7 (retired from the 12th District of the Chicago Police Department) and the American Legion – Post 390 of Aurelia (Vietnam Veteran, Army Signal Corps).


Sak is pursuing legal action against the City of Aurelia so he can be reunited with his service dog.
In accordance with our mission, Animal Farm Foundation is committed to assisting Sak with securing funding for this case. For more information, please contact Kim Wolf at (845) 418-0778 or kwolf@animalfarmfoundation.org.