The Professor Who Has a Heart for Egyptâ€™s Poor 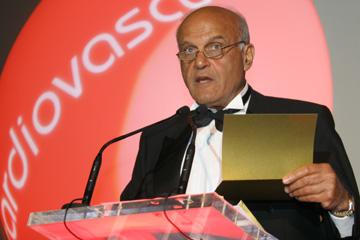 The son of a surgeon, Professor Sir Magdi studied at Cairo University and qualified as a medical bachelor in 1957. It is said that he chose heart surgery after his young aunt died of heart disease. In 1964 he became Senior Surgical Registrar of Britain’s National Heart and Chest Hospitals (1964-1968), and was Assistant Professor at the University of Chicago in 1969. By 1973, Professor Sir Magdi was Consultant Cardiac Surgeon at Britain’s National Heart Hospital, Royal Brompton and Harefield NHS Trust.

Knighted by HM Queen Elizabeth in 1992, Professor Sir Magdi retired from Britain’s National Health Service in 2001, but he continued his work as British Heart Foundation Professor of Cardiothoracic Surgery (1986-2006), and Professor of Cardiothoracic Surgery at Imperial College. Through his 1995-founded British charity, Chain of Hope, Professor Sir Magdi continues to operate on impoverished babies and children with congenitally defective hearts. Key to his methodology is the intricate ‘switching’ of their heart vessels.

Significantly, the Magdi Yacoub Heart Foundation established the Aswan Heart Centre. It provides advanced cardiac surgery, treatment and clinical services, and is based beside the Nile in Aswan. The Aswan Heart Centre’s principle beneficiaries are poverty-stricken Egyptians.

The Magdi Yacoub Heart Foundation is vital for the good cardiovascular health of poor Egyptians and others in need throughout the Middle East. Professor Sir Magdi’s Foundation, through its Aswan Heart Centre, is empowering new generations of scientists, biologists and physicians. The centre’s research is advancing biomedicine and related aspects of medicine, and consequently its findings are benefitting the world’s leading medical institutes.