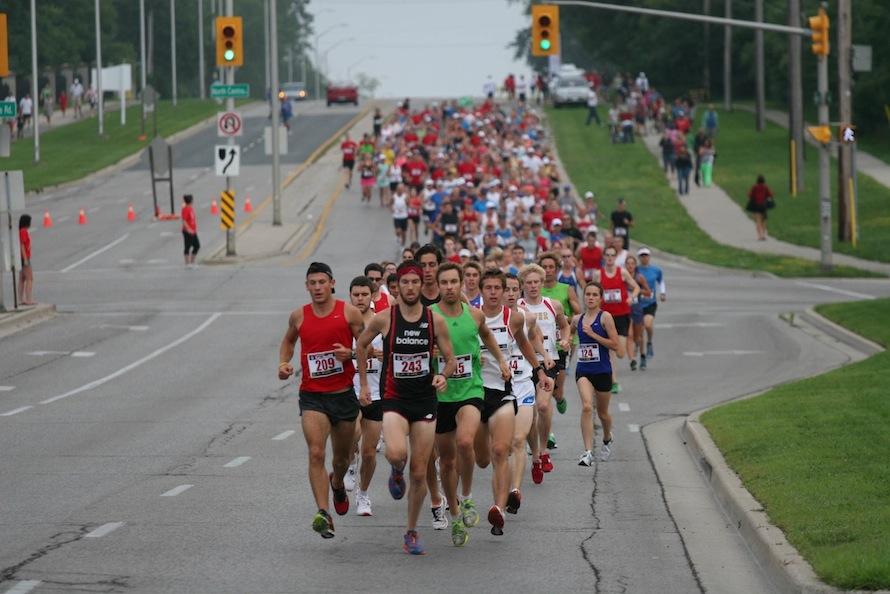 Under the leadership of two of London’s most successful distance running siblings, Brandon Laan and Chantelle Wilder, nearly three-hundred participants took to the streets of beautiful north London Sunday Morning, August 21, 2011, where they were met with exactly what they were promised—a festival style race atmosphere, featuring live bands, cheerleaders and their signature “Cowbell Curve” cheer station—whereby fans and volunteers rang cowbells to motivate athletes through the half way point in an event called Rock The Road 10K.

According to Co-Race Director Chantelle Wilder, “The best road races are the ones that are efficient and exciting from registration to finish line, and that’s exactly what we delivered.” The race’s easy online registration and fully loaded Health & Fitness Expo (presented by Two Men and A Tent Health) this past Friday and Saturday were indicators of the type of professionalism runners could expect for Sunday’s race. “We placed high value on top quality race management including well organized aid stations, accurate timing, clear kilometer markers and quick access to online results.” said Head Race Director, Brandon Laan, “…and so far all the positive feedback indicates that we hit the nail on the head with providing the London running community the race they have been waiting for.“

In addition to the upbeat atmosphere and superb organization, The Rock The Road 10K offered runners the unique opportunity to race 100% on city streets, unlike most Canadian road races that include city bike paths to cut costs and avoid hiring police officers and recruiting volunteers.  According to Laan, the course crossed 49 intersections that were carefully staffed by the race’s nearly 100 volunteers and 18 London Police officers.  Former University of Western Ontario Cross Country runner, Constable Shayna Boland, provided volunteers with clear instructions on how to protect the runners while allowing traffic to run smoothly.

After light thunderstorms Saturday evening, participants and race management alike were relieved to realize near optimal conditions with a start time temperature of 17 degrees.  Some participants did express difficultly confronting the 100% humidity reading.

The race’s nearly 300 participants ranged in age from 13 to 67 and represented varying ability levels from recreational runners to some of Canada’s most elite distance runners.  Dayna Pidhoresky, 24, of Tecumseh, ON, and Rob Watson, 28, of Guelph, ON (native of London, ON) were ultimately victorious over the flat and fast course, running 33:44 and 30:08 respectively.  Both were awarded $1000 in prize money.

The Rock The Road race management team and their title sponsor RunnersFeed.com believe that with the support of the London community, the Rock The Road 10K has the potential to compete with Canada’s most prestigious and economically impactful races like the Vancouver Sun Run and the Ottawa Race Weekend; both attracting tens of thousands of runners each year.

Proceeds from the Rock The Road 10K benefit The Sunshine Foundation—a London, ON based non-profit responsible for making dreams come true for seriously ill or disabled children.

About the company:
Runners Feed Ltd is an online media company publishing running news, runner product reviews, runner training tips, and nutrition to the amateur and elite runners. Rock The Road 10K is a division of Runners Feed Ltd.