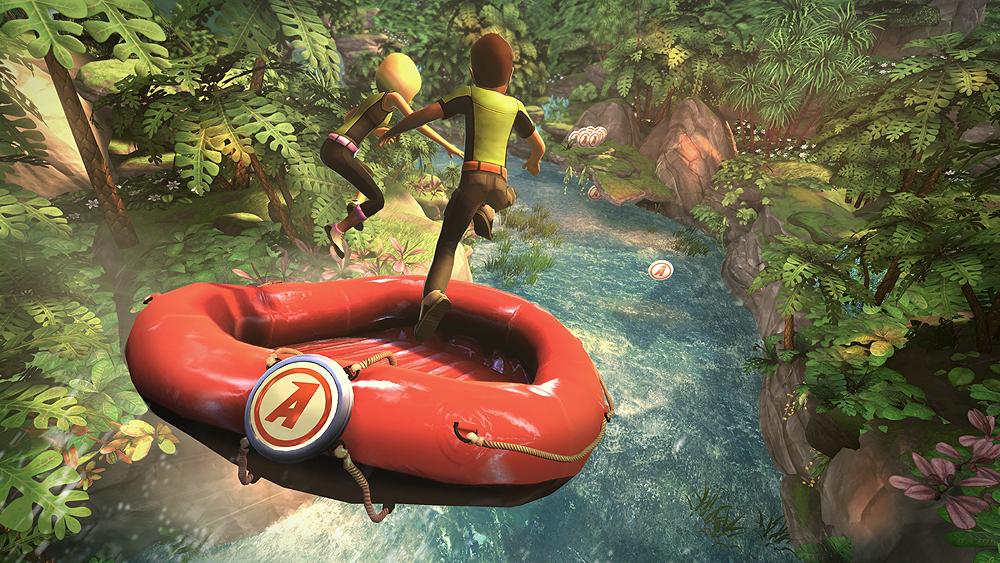 Tune in to see it on “The Oprah Show®.” And find out what has Ellen DeGeneres moving and grooving. Even Geoffrey the Giraffe® knows Kinect for Xbox 360 is sure to be the hottest gift this holiday. Today, the countdown to Kinect begins, as Microsoft Corp. announced the launch of a multiyear advertising campaign and revealed the complete lineup of 17 controller-free games that will transform living rooms around the world starting on Nov. 4.

With pre-orders rapidly selling out and thousands of retailers across the country opening at midnight on launch day, Kinect is set to fly off store shelves and get everyone off the couch and on their feet this holiday season.

“The very first time we saw Kinect, we knew it would be a ‘must have’ item for the holiday season,” said Richard Barry, vice president, general merchandise manager, Toys “R” Us® Inc. “There is no better place in the world to introduce innovative new products than Toys “R” Us, and we are excited about the full day of activities planned in New York City, building up to the much anticipated sale of the first Kinect sensor at our flagship store in Times Square.”

Excitement for Kinect has reached a fever pitch. Over the past four months, tens of thousands of kids and parents, seasoned gamers and newbies alike jumped into the world of controller-free entertainment on the nationwide Kinect Experience Tour. This week, Microsoft continues to fan the flames with the launch of the Kinect global ad campaign.


Tune in to see Kinect for Xbox 360 featured on “The Oprah Show” on Tuesday, Oct. 19 as part of “Susan Boyle, Jackie Evancho: What Happened to the Next Big Thing?” Check local listings for air times. Even Ellen is in on the fun when Kinect makes a special appearance on the “The Ellen DeGeneres Show” later this month.

“The Xbox 360 team created a multiyear, integrated campaign showcasing real people at the heart of the experience,” said Mike Delman, corporate vice president of IEB global marketing, Microsoft. “Kinect puts consumers at the center of their entertainment, and our marketing efforts follow that same charter.”

A Gift for the Whole Family

For less than the price of four tickets to see “The Nutcracker” this holiday, Kinect is a gift that awakens the living room all year round with laughter, camaraderie and the simple joy of new experiences shared with family and friends. The all-in-one Xbox 360 4GB Console with Kinect includes the new Xbox 360 4GB console, Kinect sensor and “Kinect Adventures,” priced at $299.99 ERP (U.S.). Or for those who have an Xbox 360 console1 at home, the stand-alone Kinect for Xbox 360 priced at $149.99 ERP (U.S.) includes the Kinect sensor and “Kinect Adventures” and works with the 42 million Xbox 360 consoles currently in homes worldwide.

With 17 Kinect-enabled titles debuting in November, Kinect for Xbox 360 offers something for gamers (and nongamers) of every stripe.

Befriend a playful tiger cub, collect treasures from around the globe or cast a spell in the wizarding world. Whether adopting a new family pet in “Kinectimals” (Frontier Developments Ltd./Microsoft Game Studios), or embarking on a wet and wild rafting trip in “Kinect Adventures” (Good Science Studio/Microsoft Game Studios), Kinect for Xbox 360 is the one gift the whole family will enjoy this holiday season.

Off the Couch and Into the Gym

Kinect gives you all-new ways to swing, sweat and step up your workout with a range of exclusive dance and fitness games. From martial arts and yoga to a variety of activities in “Your Shape: Fitness Evolved” (Ubisoft) to the iconic personal trainers of “The Biggest Loser Ultimate Workout” (THQ), you’ve never had a living room workout like this before.

Co-Op or Compete? The Choice Is Yours

Step onto the field with the first generation of sports games that turn your whole body into the controller. Want to play soccer? With Kinect, you use your feet — not your thumbs! Hone your skills solo, or compete with friends at home and afar over Xbox LIVE. Beach volleyball, boxing, skiing and more — Kinect offers something for athletes of every stripe.

Get your adrenaline fix with new, controller-free ways to race and rumble. Kinect removes the barrier between you and your games, delivering action and excitement like nothing you’ve experienced before.

So much more than just games, Kinect brings entertainment to life in magical new ways, offering controller-free TV, movies, music and sports and connecting family and friends from coast to coast with video chat from the comfort of the living room. With Xbox LIVE, jump right into a movie in instant-on 1080p high-definition simply by saying “Xbox, play,” or thumb through millions of songs from Zune with just a wave of your hand. You can even literally reach out and freeze the frame on that game-changing touchdown or three-pointer with ESPN on Xbox LIVE. With cutting-edge experiences for movie buffs, music lovers, sports gurus and gamers alike, Kinect and Xbox 360 bring the living room of the future home this holiday.3 For more information, visit http://www.kinectholiday.com.

Follow Kinect on Facebook as we tour the world, transforming how people experience games and entertainment. More information is available at http://www.facebook.com/xbox.

Xbox 360 is a premier home entertainment and video game system. This November, with the addition of Kinect, Xbox 360 will forever transform social gaming and entertainment with a whole new way to play — no controller required. Xbox 360 is also home to the best and broadest games as well as the largest on-demand library of music, standard- and high-definition movies, TV shows and digital games, all in one place. The entertainment center of the living room, Xbox 360 blends unbeatable content with a leading social network of 25 million Xbox LIVE members to create a limitless entertainment experience that can be shared at home or across the globe. More information about Xbox 360 can be found online at http://www.xbox.com.

Founded in 1975, Microsoft (Nasdaq “MSFT”) is the worldwide leader in software, services and solutions that help people and businesses realize their full potential.

Note to editors: For more information, news and perspectives from Microsoft, please visit the Microsoft News Center at http://www.microsoft.com/news. Web links, telephone numbers and titles were correct at time of publication, but may have changed. For additional assistance, journalists and analysts may contact Microsoft’s Rapid Response Team or other appropriate contacts listed at http://www.microsoft.com/news/contactpr.mspx.