Shareprices.com: Forecast-Beating US Job Data Completes Trio of Figures that could Save UK Stock from Summer Slump 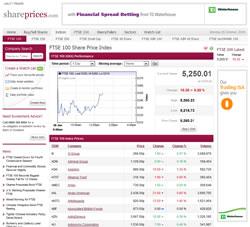 Forecast beating US job data could spell the end of a difficult month for London stocks as a smaller-than-expected decline in non-farm payrolls in the country has bolstered sentiment in the global economy. Shareprices.com, the free website providing free up-to-the-minute share information on all FTSE 100, 250 and 350 London Stock Exchange listed companies, believes the latest US news along with recent figures from China and Australia could spark a stock market resurgence following a difficult summer of trading.

US employment fell for a third consecutive month in August, however the drop was far less than initially predicted by experts.

Non-farm payrolls shed a further 54,000 jobs according to the US Labour Department with the unemployment rate rising to 9.6 per cent from 9.5 per cent in July.

And the majority of the job losses were Government based with114,000 temporary employees tasked to compile the US census completing their work during August.

The news has boosted sentiment in the state of the global economy and could mean a period of relief for stock exchanges across the globe as many look to recoup the losses made during a turbulent summer of global economy fears.

Gross Domestic Product data from the largest economies in the world shook investor confidence in August; however the new job data from the US and two other positive figure-releases from overseas look set to spell a turnaround for global stocks.

In the space of a week, both China and Australia released data that improved investor sentiment.

China confirmed a growth in manufacturing in the nation, whilst Australia said GDP in July grew at its fastest rate for three years.

The FTSE 100 has jumped to its highest value for three weeks on the back of today’s data from the US, and shareprices.com founder David Holmes said the trio of results could mean a strong rebound for London stocks.

Holmes said: “London stocks desperately needed a boost after the US, China and UK posted declining economy results in recent weeks. Any fear for the economy will spark a sell-off of risk assets, meaning the heavyweight bank shares and mining stocks that dominate the blue-chip index will anchor the FTSE.

“Australia’s GDP figures proved it isn’t all doom and gloom for the economy, China’s manufacturing data reinforced investor confidence that commodity stocks would remain in demand, and today’s US job data will ease some concerns about the world’s wealthiest economy.”

Shareprices.com offers fast streaming of the London Stock Exchange, allowing users to react to any peaks and dips in market prices quickly and effectively when buying and selling shares.

“Shareprices.com is designed to be the perfect place for experienced investors and relative newcomers to manage their online share dealing.

“Because the streaming from the LSE is so fast, users can keep up with the fast-paced nature of the market and make the most of changes in fortunes like those sparked today by the better-than-expected US job data.”