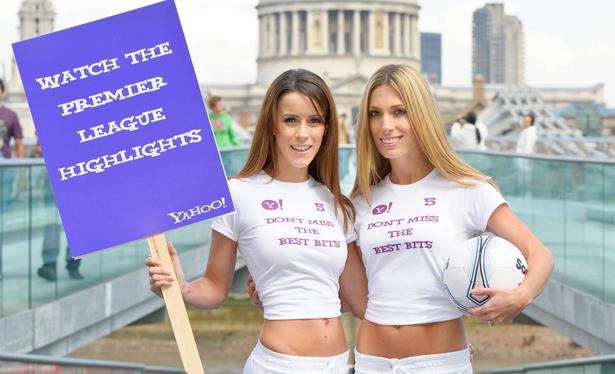 -Multi-million marketing campaign to drive both awareness and traffic

After winning the rights for seasons 2010-13 in April, Yahoo! UK will show snack-sized (up to 5 minutes) packages of every game this season. The deal with the Premier League means that Yahoo! now has one of the largest high-quality video inventories in the UK, attracting video advertising at launch from businesses such as Adidas, Heineken, BT and Sony Pictures. Yahoo!’s Premier League highlights will be supported by a multi-million pound marketing campaign across the rest of the year with the strapline: ‘Miss a game? We didn’t’.

Mark Rabe, Managing Director, Yahoo! UK said: “Following on from the success of Yahoo!’s World Cup activity with David Beckham, our ambition for Barclays Premier League coverage is for Yahoo! to become your home for football online – whether you’re a user or an advertiser.”

Rabe continued: “Yahoo’s Barclays Premier League coverage will deliver for both. For the casual or serious football fan, it’s the best bits of the weekend’s action – perfect to catch up on games you may have missed, for sharing with friends and for being part of the conversation at work on Monday. For advertisers, it’s a perfect example of Yahoo!’s Science, Art and Scale – a large volume of quality video inventory reaching a potential monthly audience of over 24 million users with all the tools, targeting and creative support Yahoo! offers to the market.”

After each weekend’s matches, Yahoo!’s highlights will be available just after midnight on Monday morning, with weekday games going up at the same time the next day. As well as match highlights, Yahoo! users in the UK can see a variety of ‘best-of’ packages including ‘Best Goals’, ‘Best Saves’, ‘Tactical Debate’ and ‘Team of the Week’ . There’ll also be match previews of every game. Users can share links to the highlights via Yahoo!, Facebook and Twitter.

To both attract new audiences and enhance Yahoo!’s brand association with the Barclays Premier League, Yahoo! will support the coverage with a marketing campaign across the year. Continuing the brand campaign messaging – ‘Make Yahoo! your home for football ‘ – used during the World Cup and with David Beckham, the new campaign focuses on the fact that Yahoo!’s highlights mean you don’t have to miss any Premier League action, no matter what you were doing at the weekend. It runs across radio and digital, with a partnership on XFM supported by a digital campaign that mixes search engine marketing, direct response and rich media executions on some of the UK’s largest football sites.

Richard Scudamore, Chief Executive of the Premier League, said: “The way fans access Barclays Premier League action is growing ever more diverse and sophisticated. The online highlights package is an important medium for supporters of all our clubs to be able to follow match action.

“Yahoo! has a great reputation and presence in new media and we are pleased to welcome them as a Premier League rights holder. I am sure they will do a fantastic job in reaching the widest possible online audience over the next three seasons.”

Yahoo! attracts hundreds of millions of users every month through its innovative technology and engaging content and services, making it one of the most trafficked Internet destinations and a world-class online media company. Yahoo!’s vision is to be the centre of people’s online lives by delivering personally relevant, meaningful Internet experiences. Yahoo! is headquartered in Sunnyvale, California. For more information, visit http://pressroom.yahoo.com, the company’s blog, Yodel Anecdotal (http://yodel.yahoo.com)