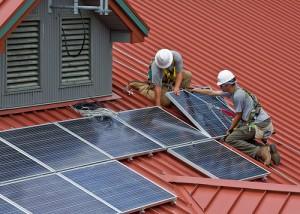 Solar Guide, the free online resource for homeowners and engineers regarding all solar-related issues, has welcomed the news that Sharp is set to expand its solar plant in Wrexham to meet the growing global demand for solar PV.

Sharp Solar announced last week that it will invest over £30m at the Wrexham-based plant to double the production of solar cell modules to meet the growing demand across Europe.

The Japanese-based firm, which began making cells at the Wrexham plant in 2004, confirmed the expansion was a necessity to keep up with the increase in demand for solar PV technology in the UK due to the introduction of the Feed-in Tariff.

The 100 per cent increase in production means the Welsh factory will up its current 250MW of crystalline solar cell modules it produces annually to 500MW.

In a statement regarding the expansion, Andrew Lee, General Manager of Sharp Solar, said: “We wanted to prove to the Government and critics that if stability was put in [the UK market] then PV companies would invest in the country.”

The introduction of the Feed-in Tariff this year has offered UK homeowners the biggest incentive to switch to solar PV and away from traditional electricity supply. However, since the Feed-in Tariff, grants and incentives for other green technologies have been closed or stalled to help fund the reduction of the nation’s deficit and as a result the government has been criticised for not offering enough support for the renewables industry.

Sharp’s expansion of its 750-staffed Welsh plant is a clear statement to the government that homeowners will seriously consider switching green and help the nation reach it’s emission reduction targets if the technology is given sufficient support financially.

David Holmes, Solar Guide’s founder, said: “It’s great news for the solar industry as a whole that a company the size of Sharp has to expand its solar business to cope with the new influx of demand.

“This is a clear sign that solar PV is a fast emerging reality for many UK homeowners and proves that the Feed-in Tariff is working as an incentive for people to make this decision.”

Solar Guide provides anyone looking into making the switch to solar PV or solar water heating with a simple format and clear guide of the costs and how to go about getting quotes from qualified and reputable installers.

“As well as strong financial incentives, its primary to give the public a clear indication of what solar PV and solar water heating is all about,” Holmes added.

“Solar Guide has a Solar PV Calculator that’s free to use and lets consumers get an idea of what the financial implications of installing solar PV into their home are. There is clear information about the technology and benefits and a very simple, hassle-free, quotation process. Solar is still a bit of an unknown, so we think we should give homeowners all the details they require as an additional information incentive.”