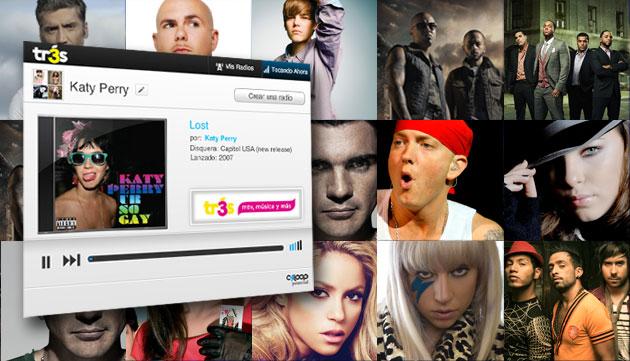 Winning artist will have a song and music video produced by award-winning producers, which will air on TrÌs, Yahoo! en Español, and V Cast Video on Demand By Verizon

Verizon consumers get the exclusive opportunity to win a trip to Los Angeles, California, to witness the filming of the winner’s video

— Tr3Ìs: MTV, Música y Más, which celebrates the bilingual/bicultural music and lifestyle of Latinos in the U.S., and Yahoo! en Español (NASDAQ:YHOO), are launching the Dame un Break contest sponsored by Verizon – giving up-and-coming artists and bands the opportunity to experience the music industry and get a shot at stardom.

“The Dame un Break contest is a once-in-a-lifetime opportunity for aspiring artists to follow their dreams and showcase their talent for the world to see. It’s quite possible that we may help launch the next superstar,” said Armando Rodriguez, General Manager, Yahoo! Hispanic Americas. “Yahoo!’s unmatched size and scale, combined with the ability to create compelling online experiences, enables advertisers like Verizon to connect with highly engaged audiences for maximum impact.”

“Music is at the core of the Tr3Ìs brand, so we’re incredibly excited to partner with Yahoo! en Español and Verizon to offer talented music artists a chance to express their individuality and compete for the chance to be the next big star,” said John Mafoutsis, Senior Vice President of Ad Sales and Brand Solutions for Tr3Ìs. “The opportunity to have their song recorded and video directed by an award-winning producer and viewed by millions of people will give them incredible exposure in a highly competitive industry.”

Aspiring artists can audition on dameunbreak.com via Yahoo en Español from July 13th – August 8th. The voting period will run from August 16th – 29th and the winner will team up with Latin Grammy award-winning producer Sebastian Krys and Tr3Ìs to produce the song and video, respectively. The music video is set to premier on multiple platforms, including an exclusive on V Cast Video On Demand by Verizon, followed by debuts on Yahoo! en Español and Tr3Ìs.

Verizon subscribers get exclusive opportunities that empower them to participate in each phase of the program in a variety of ways, including texting “DUB” to 66333 or visiting dameunbreakfan.com to enter the “Dame un Break Fan Sweepstakes” for a chance to win a trip to Los Angeles, California, to see the filming of the winner’s video. Yahoo en Español users and Tr3Ìs viewers can also create communities around their favorite Dame un Break entrants.

Yahoo! attracts hundreds of millions of users every month through its innovative technology and engaging content and services, making it one of the most visited Internet destinations and a world-class online media company. Yahoo!’s vision is to be the center of people’s online lives by delivering personally relevant, meaningful Internet experiences. Yahoo! is headquartered in Sunnyvale, California. For more information, visit http://pressroom.yahoo.com or the company’s blog, Yodel Anecdotal (http://yodel.yahoo.com).