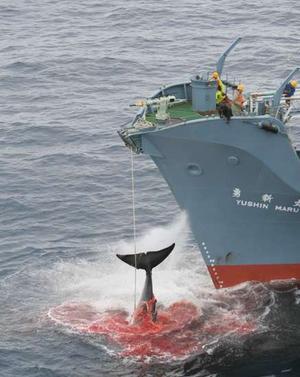 — In a move welcomed by conservationists and pro-whale countries around the world, the International Whaling Commission today announced that it would postpone a compromise proposal that would have legalized commercial whaling.  This move is a dramatic turnaround from years of secret, closed-door negotiations that led to the compromise proposal — a proposal that would have sacrificed the quarter-century old ban on commercial whaling in an attempt to rein in Japan, Iceland and Norway’s annual killings.

NRDC believes the whaling moratorium to be one of the 20th century’s most iconic conservation victories.  It has saved hundreds of thousands of whales since it took effect in 1986.

The Commission left the agenda item open, so the compromise proposal could be revisited later this week.  It is more likely that the Commission will postpone any further discussions of a compromise until its next plenary meeting.

Following is a statement from Taryn Kiekow, staff attorney with NRDC’s marine mammal protection program: “I’m cautiously optimistic.  If the pro-whaling compromise is indeed off the table, that will be a huge victory for the whales against terrific odds.  The Commission tasked with protecting these mammals has shown great leadership by refusing to adopt a proposal that could have led to the extinction of some already endangered and threatened species.”

“Still, it is not enough that the decision is delayed. The International Whaling Commission must reaffirm its dedication to the preservation and protection of whales around the world.   Now is the time to push for the conservation of whales — without trading away the moratorium.  Every day marine mammals face new attacks from entanglement, ship strikes, and pollution.  It was reckless for the Commission to even consider sanctioning their slaughter at this time.”

“What’s being called a ‘compromise’ wasn’t one at all — it was a capitulation to pro-whaling interests at the expense of the whales.  It would have legalized commercial whaling without seeking any end to it.  Legitimizing commercial whaling would have rewarded Japan, Norway, and Iceland — which have continued to kill tens of thousands of whales despite the moratorium — for their years of flagrant defiance of international law.”

Japan, Iceland and Norway have killed roughly 35,000 whales since the moratorium was introduced in 1986. In Japan’s case, the killings have been justified under the guise of “scientific research.” Prior to the 1986 whaling moratorium, roughly 38,000 whales were killed annually (between 1945 and 1986), compared with an average of 1,240 whales killed per year after the moratorium (1987 onwards).

For more on the IWC, read Taryn Kiekow’s blog from Morocco:
Good News for the Whales – IWC Delays Whaling “Compromise”