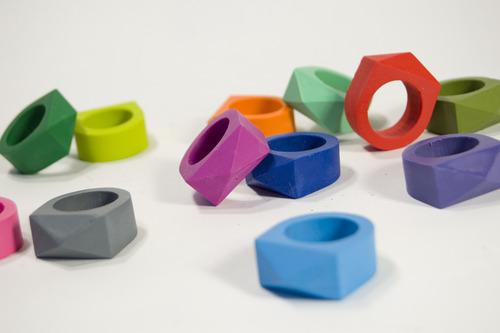 Celebrated designer Timothy Liles launches this week a three-piece furniture collection called “New New England”. The modern trio is influenced by traditional American craft aimed at connecting consumers with the source of their products, bringing maker and user closer together. The collection pays homage to New England’s classic heritage aesthetic and refined craftsmenship —-but with a twist of pop.

From May 15th to May 20th, the collection pops up again in the Ace Hotel’s coveted loft suites. Guests of the New York Ace Hotel will have an opportunity to live with the collection and learn about the extensive process behind each product from the comfort of their rooms. Checking in? Check them out. Ace Hotel NY/ 20 West 29th Street, New York, NY 10001.

“The Crested Comb-Back Chair” is an understated, three-legged wooden chair with a sash of matte charcoal grey, or a light cream, that extends from slightly above to just below the seat. An exploration of the straight-forward joinery found in a classic Windsor and how the form can be pared down an modernized.

“The Braid Dead Rug” is a mushroom-shaped, hand-braided wool mat on whose surface appears a vividly-colored, benevolent-looking skull. A combination of traditional techniques with a pop icon.

“The Sweetser Lamp” is a peaceful, woven lamp made in the tradition of the basket-making Sweetser family of Northern New Hampshire. Solid ash legs incorporated into the weave turn the basket into a lampshade and the textile-covered cord informs the object as a modern light.

Timothy is a New England based designer originally from Long Island, New York. He received a BFA in furniture design from the Rhode Island School of Design (RISD) and believes that creating something where there once was nothing is the most magical feeling there is. After five years as a sneaker designer for Converse and with a handful of multi-million pair sellers under his belt, an unexpected but welcome realignment of priorities led Timothy to leave the corporate world and focus on his personal projects.

On the success of his blog-famed “Crayon Rings” and with furniture projects like the “Shoestring Settee” gaining in popularity, Timothy opened his own studio in late 2009.

His work is guided by the idea that the best design is not overwrought; it is merely simple from a new perspective. He currently resides in Portsmouth, NH and can often be found surfing or wandering the aisles of Home Depot. Like Kevin Garnett, Timothy believes that anything is possible.

Timothy Liles’s work sails along the borders of craft, art, and design. Whether he is installing a bespoke object in a public space or conceiving a new product line, he strives to elicit an emotional response from his audience which is broad: tweens adore his Crayon Rings and design connoisseurs have taken

note of his superbly constructed home furnishings. As such, his work has been featured in stores—like Bergdorf Goodma, 225 Forest (the Nike 6.0/Hurley/Converse action sports store), and the Tate Gallery Shop —that appeal to a range of tastes and temperaments.

For Timothy, his approach to design is both conceptual and highly tactile. His work is guided by the idea that best design is not overwrought; it is merely simple from a new perspective. As his projects are more likely to materialize on a pair of sawhorses than on a PC, he operates under the premise that our technology-saturated age has elevated the status of handmade goods to new levels of desirability. What was once considered inefficient is now luxurious. He firmly believes that users deserve deeper connections to the places and the people their products come from, that our emotional ties, nostalgia, and pride associated with our material things is what makes them worth having. At that, every design is produced end-to-end within New Hampshire, or at furthest, the New England region in collaboration with true craftsmen and craftswomen who imbue their objects with all the love and respect that honest hand-work is capable of.

Because Timothy is confident that a creative spirit can enhance anyone’s life, he welcomes the idea of sharing his passion for his craft and experiences as a designer/maker with diverse audiences. To book a speaking engagement, please contact gabriela@designmouth.org.