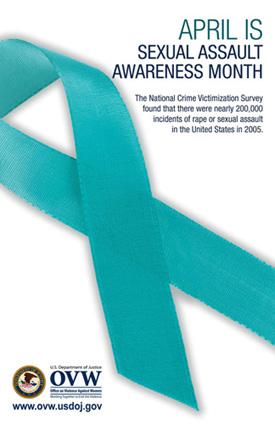 “The Department is proud to commemorate April as Sexual Assault Awareness Month and bring attention to this tragic issue that affects men, women, boys and girls in communities across the country,” said Attorney General Eric Holder.   “We know the Department cannot do this work alone, and we stand committed to working with our federal, state, tribal and community partners who are doing critical work in this area every day.”

“Highlighting April as Sexual Assault Awareness Month provides all of us with an opportunity to recognize that through our combined efforts, we can end sexual violence,” said Judge Susan B. Carbon, Director of the Office on Violence Against Women (OVW).  “In the fifteen years since the Violence Against Women Act (VAWA) was signed into law, we have made enormous progress combating domestic violence in intimate and family relationships.   We have been able to equip communities with the resources to protect survivors and save lives.   We are equally committed to making the same significant social and legal improvements around sexual assault so that no one will have to endure the pain and humiliation that accompanies sexual violence.”

On Sept. 14, 2009, the Department of Justice marked the fifteenth anniversary of VAWA and the creation of OVW.   The department launched a year-long effort to raise public awareness, build stronger coalitions among federal, state, local and tribal communities, and redouble efforts to end domestic and dating violence, sexual assault and stalking for men, women and children across the country.   Most recently, nine members of the Department of Justice leadership visited 11 universities around the nation throughout the month of March to raise awareness about violent crimes affecting college campuses.

President Obama’s FY2011 budget request provides $461 million for OVW to provide communities with resources to combat sexual assault and violence against women, a 6 percent increase from FY2010.   This includes $30 million for the Sexual Assault Services Program (SASP), the first federal funding stream solely dedicated to the provision of direct intervention and related assistance for victims of sexual assault.   In FY2009, OVW made the first grant awards under SASP, totaling more than $16 million.

OVW provides leadership in developing the nation’s capacity to reduce violence against women through the implementation of VAWA and subsequent legislation.   Created in 1995, OVW administers financial and technical assistance to communities across the country that are developing programs, policies and practices aimed at ending domestic violence, dating violence, sexual assault and stalking.   For more information, please visit www.ovw.usdoj.gov/vawa15.htm.