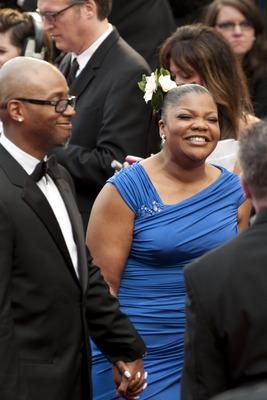 Rick Carter:  Jim Cameron, this… this Oscar sees you. Clearly, your vision is so deep…

Robert Stromberg:  You know, 13 years ago, the doctors told me I wasn’t going to survive and I thought that this dream of standing here would never come true. And, here we are. I owe this to my amazing wife, Lizz, my two kids Reese and Remy, for supporting me. Brooke Breton and Rick Carter and the hundreds of people that it took to make this film. Thank you. Special thanks to Jon Landau.

Jim, every day we went to work. We knew we were working with a genius. We really were. We all felt that. Thank you so much.

CATEGORY: Performance by an actress in a supporting role SPEECH BY: Mo’Nique

FILM: “Precious: Based on the Novel ‘Push’ by Sapphire”

First, I would like to thank the Academy for showing that it can be about the performance and not the politics. I want to thank Miss Hattie McDaniel for enduring all that she had to so that I would not have to. Tyler Perry and Oprah Winfrey because you touched it, the whole world saw it. Ricky Anderson, our attorney of Anderson & Smith, thank you for your hard work. My entire BET family, my Precious family, thank you so much. To my amazing husband Sidney, thank you for showing me that sometimes you have to forego doing what’s popular in order to do what’s right. And baby, you were so right. God bless us all.

FILM: “Precious: Based on the Novel ‘Push’ by Sapphire”

I don’t know what to say. This is for everybody who works on a dream every day. Precious boys and girls everywhere. All the cast and crew, anyone who’s kept believing in me. My two brothers, supported me in every way. My role models, my heroes, Buddy and Todd. My mother, Bettye, angel of my world. My father, Alphonse, who spent so much time with us and taught us everything. I’m sorry I’m drawing a blank right now, but I thank everyone.

CATEGORY: Performance by an actor in a supporting role

Oscar and Penélope that’s an über bingo. I always wanted to discover some new continent and I thought I had to go this way, and then I was introduced to Quentin Tarantino, who was putting together an expedition that was equipped by Harvey Weinstein and Lawrence Bender and David Linde, and he put this script in front of me and he said, “This is where we’re going, but we’re going the other way.”

So Brad Pitt helped me on board and Diane Kruger was there Melanie Laurent and Denis Menochet and Bob Richardson and Sally Menke and Adam Schweitzer and Lisa Kasteler. Everybody helped me find a place. Universal and The Weinstein Company and ICM and Quentin, with his unorthodox methods of navigation, this fearless explorer, took this ship across and brought it in with flying colors and that’s why I’m here.

And this is your welcoming embrace and there’s no way I can ever thank you enough, but I can start right now. Thank you.

Ryan Bingham: Thank you so much. I’d like to thank my wife Anna, I love you more than rainbows, baby. My uncle Clay, my band, Jack Whigham, Scott Cooper, the cast of Crazy Heart, Jeff and Maggie and Colin and Mr. Bob. Everyone at Fox Searchlight and Mr. T Bone Burnett and Stephen Bruton. Thank you all so much.

Oh my god. Wow, thank you Academy. You honor me and humble me with this. More than, more than you know. I was a reporter back from Iraq with the idea for a story about these men on the frontlines of an unpopular war.

I thought it might make a movie. The result wildly exceeded my expectations. And that is thanks to so many people. To Summit Entertainment. To our amazing cast and crew, and most of all to one extraordinary individual and visionary filmmaker. Kathryn Bigelow, this belongs to you.

Good evening. It doesn’t look like, but it’s a French film. Sorry about the accent. I’m the producer of the film, so I have to thank the 3,000 non-official sponsors that appear in the film. And I have to assure them that no logos were harmed in the making of the project.

This award has to be shared with the incredible people who made the film. All the team and especially, the three directors that are with us in the theater tonight: François Alaux, Hervé de Crécy and Ludovic Houplain. You can applaud them, the directors.

Thanks for them. They have been working for a very long time on this film. It took, like, six years to make this 16 minutes, so I hope to come back here with a long feature film, in about 36 years. Thank you very much. Bon soir.

Boy, never did I dream that making a flip book out of my third grade math book would lead to this. Boy. It’s incredible being here, it’s just me right now, but please picture this whole stage full of the most amazing cast and crew you’ve ever experienced. Jonas Rivera, producer. Bob Peterson, co-director. You guys should all be up here with me. Thanks so much to Disney and to Pixar Animation Studios for believing in this oddball film.

It was an incredible, incredible adventure making this movie, but the heart of it came from home. And to our families, in my case, to my wonderful parents, they were so supportive. My kids, Nicholas and Ellie, and my amazing wife Amanda, you guys are the greatest adventure. Thank you.

SPEECH BY: Joachim Back and Tivi Magnusson

Joachim Black:  Whoa. I just don’t know if I should dance or if I should… Well, this is just pretty much amazing and I just want to say thanks to everybody who’s been on this project and to our beautiful cast and my producer Tivi. And it’s pretty much… a ride, I must say, I can’t say anything else, but I just want to thank Sam Bisbee, Jackie Kelman and Russell Icke. I hope you guys are watching. Edelman, Pawel Edelman, beautiful. But anyway, thank you very much for everything.

These transcripts may not be reproduced except as brief quotes used in conjunction with news reporting about the 82nd Academy Awards®.  All content Copyright © Academy of Motion Picture Arts and Sciences.

“Oscar®,” “Oscars®,” “Academy Awards®,” “Academy Award®,” “A.M.P.A.S.®” and “Oscar Night®” are the trademarks, and the ©Oscar® statuette is the registered design mark and copyrighted property, of the Academy of Motion Picture Arts and Sciences.

Additional information regarding the “Terms & Conditions of Use” and “Legal Regulations for Using Intellectual Properties of the Academy” may be accessed online at http://www.oscars.org/legal