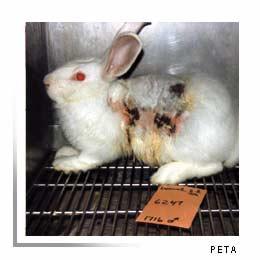 In the rabbit test, which is used to test chemicals for corrosivity before they are transported, rabbits’ backs are shaved and chemical samples are swabbed onto to their abraded skin and left untreated for up to two weeks—without pain relieving drugs. Corrosive chemicals burn through the skin, and the rabbits are killed after the test period.

In contrast, the non-animal Corrositex® method uses a vial of liquid that changes color when a corrosive material burns through a synthetic skin-like barrier, requiring only several hours to complete.  Corrositex® was the first government-approved non-animal testing method in 1993 and, according to a subsequent press release announcing its government-wide approval, “can fully replace the use of animals for testing corrosiveness” for most classes of chemicals.

In a series of letters to the Department, including to Secretary of Transportation Ray LaHood in December 2009, PETA cited several interpretation letters it found in which the DOT had advised shipping companies to conduct both the rabbit skin necrosis test and the Corrositex® test, although the latter was intended to replace testing using rabbits and is acknowledged by the DOT to be more accurate in many circumstances.

These types of statements by the DOT are not only scientifically unjustifiable and exhibit a clear disregard for extreme suffering of animals, they also present a public safety issue. Since these interpretation letters are made publicly available for clarification, the DOT is setting a dangerous precedent that allows any company to pick and choose which test it will conduct and which results it will rely on for the purpose of classifying a chemical’s corrosive nature, rather than requiring that the best science be used.

In addition to urging the DOT to update its guidance to shipping companies so that the rabbit test is no longer recommended, PETA has asked the DOT to clearly post the Corrositex® method on its website and promote it as the preferred test for satisfying DOT’s regulatory requirements. PETA has also requested that the DOT adopt internationally-approved guidelines for several newer non-animal methods used to  evaluate skin corrosion into its Hazardous Materials Regulations.

To date, the DOT has refused to respond to PETA’s inquiries and to reporters on this issue.

For more information about PETA’s efforts to end the use of animal tests to satisfy DOT requirements, please visit http://www.stopanimaltests.com/.

Jeffrey Brown is a Research Associate in the Regulatory Testing Division of People for the Ethical Treatment of Animals and can be reached at jeffreyb@peta.org.