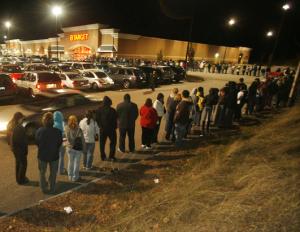 comScore (NASDAQ : SCOR), a leader in measuring the digital world, today reported holiday season retail e-commerce spending for the first 27 days of the November – December 2009 holiday season. For the holiday season-to-date, $10.57 billion has been spent online, marking a 3-percent increase versus the corresponding days last year. Black Friday (November 27) saw $595 million in online sales, making it the second heaviest online spending day to date in 2009 and representing an 11-percent increase versus Black Friday 2008.

“Black Friday, better known as a shopping bonanza in brick-and-mortar retail stores, is increasingly becoming one of the landmark days in the online holiday shopping world,” said comScore chairman, Gian Fulgoni. “The $595 million in online spending this Black Friday represents the second heaviest online spending day of the season-to-date and a double-digit increase from last year. While this acceleration in spending suggests the online holiday season may be shaping up slightly more optimistically than anticipated, it may also reflect the heavy discounting and creative promotions being put forth by retailers that now encompass the use of social networks such as Facebook and Twitter. Cyber Monday – the traditional kick-off to the online holiday shopping season – and the subsequent weeks will be the real test for how online retailers fare this season. That said, this is a very encouraging start.”

Over the years, the online channel has become an increasingly influential driver in offline shopping behavior. Before making purchases in brick-and-mortar retail locations, consumers have become adept at doing their research beforehand. The array of sites doing round-ups of Black Friday deals are becoming more popular than ever.

Some other notable findings about Black Friday deal-seeking include:

“Much attention has focused on Amazon and Walmart this season, and both retailers performed particularly well online on Black Friday in terms of attracting visitors,” added Mr. Fulgoni. “We will be watching closely to see how these retailers perform during these next critical weeks of the season.”