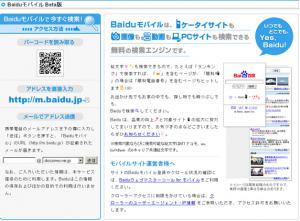 Baidu, having officially entered the Japanese market in early 2008, recently launched the beta version of its wireless search service in Japan hoping to repeat its market stronghold. If successful, Baidu is looking at cornering the market, mimicing its rival’s North American success.

With wireless Internet traffic rates in Japan being four times that of the Internet, Robin Li, the CEO of China’s largest search engine, Baidu, has big plans for his search engine provider.

Baidu currently holds 60% of the Chinese market, and is hoping to know the same success story in Japan, taking over the wireless market. Statistics show that the number of Japan’s 3G subscribers has exceeded 100 million, with the penetration rate accounting for 96 percent of the country’s population.

Baidu started out by providing search services to other Chinese portals before developing its own stand-alone search engine. Some members of Baidu’s board of directors opposed the shift, although Li was steadfast. But Li’s ambitions didn’t stop there. In January 2008, Baidu launched its Japanese-language service, Baidu Japan, its first move outside of China. Li, a firm believer in multilingual service is well-positioned to tackle the Asian market, with his deeply-rooted understanding of the market.

Case in point it might reach its goal, Baidu Inc. (NASDAQ: BIDU) hit a yearly high of $409.35 after the Chinese search company announced its beta version of its wireless search service in Japan.

According to Chinese research firm iResearch, Baidu has continued leading the market with a solid 73 percent share, far ahead of its closest rival, Google China, which has claimed 22 percent of the market. Google China has continuously struggled since first entering the market in 2000, due in large part to strong governement restrictions and regulations, as well as Baidu’s undeniable nationalist appeal.

Although ‘Google’ is synomous with ‘online search’ in most areas of the world, most Chinese don’t even know how to spell Google.

The firm’s wireless search tool “palm Baidu”,  is based on the Aladdin platform.

The name “Baidu” comes from an 800-year-old Chinese poem depicting one man’s passionate search for his lover from among a festive crowd.