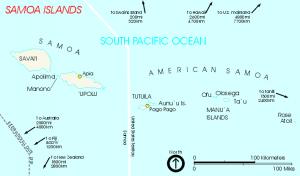 Aid is starting to reach the Pacific islands devastated by a powerful earthquake and a resulting series of tsunami waves. The death toll is now above 120 on American Samoa, Samoa and Tonga and is expected to rise as authorities reach villages cut off by the disaster.

Power and telecommunications remain cut on much of Samoa and American Samoa, as island residents struggle to recover from the disaster.

There are reports of entire villages being washed away by the tsunami waves that hit moments after a magnitude eight earthquake struck the islands.

Getting a full assessment of the damage and the loss of life is difficult. The United States, New Zealand, Australia and other nations are still rushing rescue and recovery workers to the distant islands.

Veronica Verde is the FEMA spokeswoman in Oakland, California, where the relief effort is being coordinated.

“We’re also trying to really concentrate on life-saving, life-sustaining efforts,” Verde said. “So one of the things that we’re looking at is making sure that we get resources on the ground, food, water, cots, tents, tent kits, Coleman stoves, lanterns, tarps to cover, because I know it’s their rainy season…. Those are right now some of the resources that we’re moving.”

More help is on the way, including a U.S. Navy ship carrying a helicopter and supplies. In addition, the U.S. Pacific Command says that troops from the Hawaii National Guard are headed to American Samoa.

There are reports that law enforcement on the islands is overwhelmed, trying to conduct rescues and assess damage and to prevent looters from ransacking homes and businesses.

One small bit of good news is that the port on American Samoa is in working order, which means that ships carrying supplies, generators and vehicles will be able to quickly unload their cargoes.

American Samoa is a U.S. territory; nearby Samoa and Tonga are independent nations. Their combined population is around 400,000. The islands are about 3,700 kilometers southwest of the U.S. state, Hawaii.