Taking the “Montreal” out of the Gazette

MONTREAL(RushPRnews)24/10/08–The world of journalism is in increasing jeopardy, as mega media conglomerates continue to grow and take over the news industry as we know it. Montreal’s leading English newspaper The Gazette, owned by Canada’s international media giant Canwest Global Communications Corp. has been no stranger to this change.

Unhappy with Gazette management trying to outsource pagination and other editing work to non-Gazette employees, Gazette workers continue their byline strike. Vice-President and spokesperson for the Montreal Newspaper Guild, Irwin Block, told RushPRnews, “We expect The Gazette to realize it will have to improve its offer and forget about outsourcing our work if it wants labor peace.”

The Gazette is one of over 14 daily newspapers owned by Canwest. The paper has been hit hard , with about 200 editorial, sales and advertising staff that have been working without a contract since June; 181 Guild members that have also been without contract since the summer; and lay offs of 45 reader sales & service (RSS) employees, whose work has been exported to a CanWest call centre in Winnipeg, also home to the company’s head office.

Block says in his interview with RushPRnews, “Loss of control of pagination and editing and photo processing can only lead to fewer editors handling our newspaper here and shaping it to fit our unique values.” According to Block, “Outsourcing of editorial work can only erode the quality of our newspaper and its ability to respond to changing conditions and our community’s unique culture and way of thinking.” 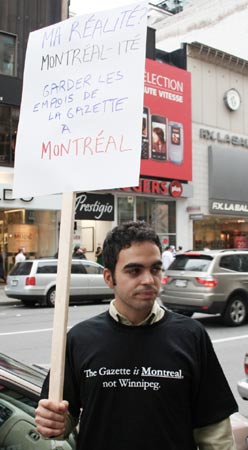 Montreal is a bilingual city, and this is one of the many reasons that outsourcing could pose a direct threat to the content of the newspaper. “Problems they’ve had with accents in French, the fact that Ste. Catherine St. requires an Ste. â€“ a feminine saint â€“ are only the most obvious cultural gaps separating outside editors and paginators from life in Quebec,” says Block.

The union has stepped the issue up to a new level, seeking a three-year deal with annual wage increases of six per cent, a major boost in vehicle allowance from $700 to $900 a month, plus improvements in vacation time, vision care and night shift differentials.

According to Block, “Less local input means less local flavor, an erosion of our capacity to mirror our city and community.” A local newspaper can never survive without knowing what’s going on in its own city. The unfortunate reality is that that outcome is intended.

Nevertheless, Gazette staff will not be budging on the matter any time soon. As Block says, “We have a strike mandate from our members in editorial, reader sales and service, and advertising and we will use all available pressure tactics before resorting to our ultimate weapon.”

The hope is that the union won’t have to take out the big guns, but if push comes to shove, the “ultimate weapon” remains to be seen.

top picture: Union vice-president Irwin Block gets interviewed by a radio reporter. His T-shirt reads “The Gazette is Montreal, not Winnipeg.”