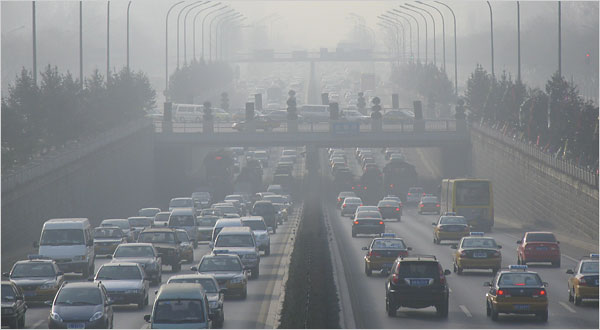 BEIJING,CHINAÂ (RUSHPRNEWS)09/02/2008–My first post to this blog a little over a year ago was about whether Beijing would clear the air for the Olympics. The media frenzy over this topic began in earnest back then in August 2007 at the one year pre-anniversary to the Beijing Olympics. My position then (and now) was that the focus on the two weeks of the Olympics was misplaced.

Even as the air turned London Killer Fog thick on certain days, we felt pretty confident that dramatic one-time measures like massive factory stoppages and pulling a million or two cars off the roads would clear the air. This sort of thing (albeit never at this scale) had worked in the past in China.

The real question deserving of serious focus, we argued, was whether China would do what it takes to sustain its clean air long after the Olympics were done and gone. And now that the Olympics have finally come and gone, the moment of truth has arrived.

China can squeeze out the last drops of environmental benefit from its temporary Olympic measures and return to its pre-Olympic ways, or China can take advantage of the good will and raised public expectations generated by its Olympic environmental achievement and make this the point in history when China really turns the corner on the environment.

On the first few days (opening ceremony included), it looked as though the measures were not working. The air was hazy and press conferences were held to state that what people were seeing was not necessarily pollution and possibly â€˜fog.’ The New York Times ran some fantastic interactive features on air quality and the Olympics.

This feature shows how much regional air pollution impacts Beijing and has an audio bit from an NYU medical professor on the impact of pollutants on athletic performance. Andy Revkin from the dot earth blog had an interesting piece comparing China sulfur dioxide pollution with the SE United States and Europe.

But in the end, the air cleared and we had some incredible, crisp days. Richard Spencer at the Telegraph set out a good summary of how things went in yesterday’s paper:

[T]he air cleared quickly as the effects of a massive shut-down of industry and “alternate day” restrictions on private car usage began to be seen.

About 150 factories in the city had production shut down, while others closed as a result of tighter security during the Games. The ban on cars on alternate days, depending on whether they had odd or even licence plates, reduced the number of cars on the roads by about a million a day.

On several days, the sky really was blue, and on Monday the mountains that surround the city to the north and west were visible from the city centre, an unusual event for the usually humid, overcast summer months.

Figures from the city’s bureau for environmental protection showed there were 14 days in which air pollution met its “level one” criteria – matching the level the World Heath Organisation declares safe when achieved over the long term.

The rest of the month was level two, which meets China’s own standard for a so-called “blue sky day”, except for one day which failed.

Average pollution was down 45 per cent, bringing it down to levels not seen since ten years ago, the ministry said in a statement on its website.

“Temporary measures to reduce pollution that were put in place in Beijing and surrounding provinces to guarantee clean air for the Olympics played a fundamental role in improving the air during the Olympic period,” the bureau said.

This is a great bit from NYTimes.com on how air quality along the Beijing marathon route changed in just a month. The route saw a 40% decrease in carbon monoxide from Olympic car restrictions, enough to make conditions (for CO anyway) comparable to those along the NYC Marathon route.

These Beijing skies were the cleanest Beijing had seen in ten years (according to China’s environmental ministry) and if you were here (and knew what things were like in days and years past) you would have seen the way this visibly lifted spirits. Beijing, a city that Beijingers commonly say is â€˜a good place for work, but not suitable for people to live in,’ was on these days downright livable. Now, it seems, expectations are way up. People here in Beijing like what they’ve seen and want it to stay that way. In one survey (see also here), “56 percent of the more than 10,000 people surveyed online said they were in favor of continuing the restrictions” on cars instituted during the Olympics. In another survey (click here for a rough Google Translate version of this Chinese article), nearly 70% said they wanted the restrictions to continue.

The pledges to sustain all of this are already coming from a number of quarters. Deputy chief Tan Zhimin of the Beijing City Building Headquarter Office for 2008 said in a Xinhua news piece that: ” It is impossible and will not be allowed should the city go backward in livability because citizen expectations are already driven up by the Olympics and the demand for further social and economic development.” Wen Jiabao has also vowed to keep Beijing clean after the Olympics.

So it may be that cleaner days are here to stay in Beijing. The potential is there to leave a real environmental legacy. Like the government leaders, environmentalists and the public at large in the U.S. and Japan of the early 1970s, today’s leaders in China could, if they are willing, put their names down in the history books as the ones who turned around the environment, not just in Beijing, but in all of China.

We at NRDC have been working with forward thinking government officials and environmental experts and NGOs in China for over twelve years to develop the critical solutions to China’s environmental problems. And the solutions are known. They include energy efficiency, transforming fundamental misalignment of incentives in the environmental governance system, harnessing the power of markets to drive quicker environmental improvement, green buildings and ‘smart growth,’ and a host of other concrete, realizeable solutions. Now what is needed is the will and the vision to make these solutions a reality.

China ended up doing a good job with air pollution control during the Beijing Olympics, but its performance, without a clear plan for the long-term, isn’t up to the gold standard yet. And China knows better than anyone else that you don’t make history unless you get the gold.