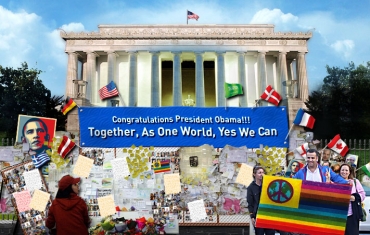 Obama’s win is a fresh start for US relations with the world. Let’s send a global message of hope and invitation to work together to the new President – it will be displayed on a giant wall in Washington DC:

WASHINGTON,DC(RushPRnews)11/05/08-After 8 long years of Bush, Obama’s victory brings a chance for the US to finally join with the world community to take on pressing challenges on climate change, human rights, and peace. After years, even decades of distrust, let’s seize this moment of unity, reconciliation and hope to send a message of warm congratulations and invitation to work together to the new President and the American people.

Dear President Obama: As citizens across the world, we congratulate you on your election, and celebrate your campaign commitments to sign a strong new global treaty on climate change, close Guantanamo prison and end torture, withdraw carefully from Iraq, and double aid to fight poverty. No one country or leader can meet the world’s most pressing challenges alone, but working together as one world in a spirit of dialogue and cooperation, yes we can bring real and lasting change.

AVAAZ built a huge wall near the White House in Washington DC where the number of signatures on our message and personal messages from around the world will grow over the next several hours. We’ve also asked Obama to personally receive our petition from a group of Avaaz members. Let’s get to 1 million signers and messages to Obama! Sign on at the link below and forward this email to others:

This is a time for celebration of democracy, but already the sharks are starting to circle â€“ oil companies, war contractors, conservative lobbyists, and the powerful neo-con clique that brought us the war in Iraq are looking for ways to dim the prospects for change. Obama has promised national unity, and these interests will ask a high price for that unity.

Let’s act quickly to make sure the people of the world are heard as Obama makes crucial choices in the coming days on how to live up to his campaign promises to secure a strong global treaty on climate change, ban torture and close Guantanamo prison, withdraw carefully from Iraq, and double aid to make global poverty history. Rarely has a US President been more likely to listen to us.

We’ll make the point that on most of the pressing issues faced by Obama and the American people â€“ from the financial crisis to climate change — we need to work together as one world to achieve change. Sign below and forward this message on:

PS – Send us pictures of yourself for our wall – email it to obamawall@avaaz.org

PPS â€“ Here’s a link to a report on Avaaz’s past campaigning â€“ http://www.avaaz.org/en/report_back_2/

PPPS – And here’s a list of 10 of Obama’s campaign promises that concern the world â€“ you can find his full platform here http://www.barackobama.com/issues/:

* Reduce the US’s carbon emissions 80% by 2050 and play a strong positive role in negotiating a binding global treaty to replace the expiring Kyoto Protocol
* Withdraw all combat troops from Iraq within 16 months and keep no permanent bases in the country
* Establish a clear goal of eliminating all nuclear weapons across the globe
* Close the Guantanamo Bay detention center
* Double US aid to cut extreme poverty in half by 2015 and accelerate the fight against HIV/AIDS, tuberculoses and Malaria
* Open diplomatic talks with countries like Iran and Syria, to pursue peaceful resolution of tensions
* De-politicize military intelligence to avoid ever repeating the kind of manipulation that led the US into Iraq
* Launch a major diplomatic effort to stop the killings in Darfur
* Only negotiate new trade agreements that contain labor and environmental protections
* Invest $150 billion over ten years to support renewable energy and get 1 million plug-in electric cars on the road by 2015

ABOUT AVAAZ
Avaaz.org is an independent, not-for-profit global campaigning organization that works to ensure that the views and values of the world’s people inform global decision-making. (Avaaz means “voice” in many languages.) Avaaz receives no money from governments or corporations, and is staffed by a global team based in Ottawa, London, Rio de Janeiro, New York, Paris, Sydney and Geneva.

To contact Avaaz, please do not reply to this email. Instead, write to info@avaaz.org. You can also send postal mail to our New York office: 857 Broadway, 3rd floor, New York, NY 10003 U.S.A.

If you have technical problems, please go to http://www.avaaz.org.