At 200 Pounds, Oprah Admits Falling Off The Health Wagon 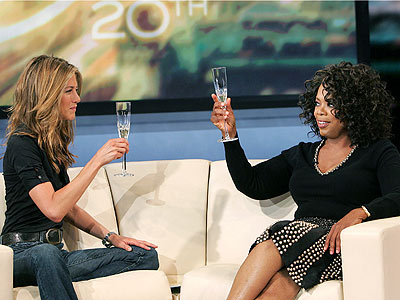 CHICAGO, IL (RushPRnews)12/09/08-When it comes to her weight, Oprah Winfrey has always been straightforward. The talk show queen continues the honesty, saying in the January issue of “O” magazine out Tuesday that she now weighs 200 pounds and has “fallen off the wagon” when it comes to healthy living.

“I’m mad at myself,” Winfrey writes in an article provided early to The Associated Press by Harpo Productions.

“I’m embarrassed,” she writes. “I can’t believe that after all these years, all the things I know how to do, I’m still talking about my weight. I look at my thinner self and think, `How did I let this happen again?'”

In the piece, Winfrey, 54, details her recent struggles with an out-of-balance thyroid and how the condition made her develop “a fear of working out.” She says she’s added 40 pounds to her frame since she weighed 160 pounds in 2006.

“Yes, you’re adding correctly; that means the dreaded 2-0-0,” Winfrey writes. “I was so frustrated I started eating whatever I wanted â€” and that’s never good.”

Winfrey also writes that her goal is no longer to be thin; instead, she wants to be strong, healthy and fit. She hopes to get started with her upcoming “Best Life Week,” starting Jan. 5 with an episode of “The Oprah Winfrey Show” during which she is expected to talk candidly about her weight.

Winfrey famously wheeled a wagon loaded with fat onto the set of her talk show in 1988 to represent a 67-pound weight loss while wearing a pair of size 10 Calvin Klein jeans. She had lost the pounds with a liquid protein diet.

“I had literally starved myself for four months â€” not a morsel of food,” Winfrey recalled in 2005. “Two hours after that show, I started eating to celebrate â€” of course, within two days those jeans no longer fit!”

Winfrey’s weight has yo-yoed to the delight of the tabloid press ever since. She weighed as many as 237 pounds and by late 1990 admitted she had regained most of the 67 pounds, saying “I’ll never diet again.”

In 1994, she finished the Marine Corps Marathon and by 1996 hired personal trainer Bob Greene, saying her roller-coaster weight saga was over.

But now, 20 years since the Calvin Klein jeans episode, Winfrey finds herself tipping the scales again, telling AP Television last week that she has yet to chose a gown for President-elect Barack Obama’s inaugural ball next month.

“I had a dress on the vision board, but I’m not sure that’s gonna fit,” Winfrey said. “So I have to work on something else.”

In the latest “O” magazine article, Winfrey writes that she hit rock bottom when she wanted to skip out on an April 26 taping with Cher and Tina Turner in Las Vegas.

“I felt like a fat cow,” Winfrey writes. “I wanted to disappear.”

Winfrey’s weight and height put her body mass index at 31.8, which is obese, according to the Centers for Disease Control and Prevention. The CDC says people who are obese are “at higher risk for chronic conditions such as high blood pressure, diabetes and high cholesterol.”

It seems Winfrey is aware of the health risks, inviting both Greene and Dr. Mehmet Oz to her show during the first week of January, along with spirituality experts, sex therapists and financial expert Suze Orman.

Winfrey also is expected to discuss her weight on her XM satellite radio station’s “The Gayle King Show” on Jan. 5 and will host interactive live Web casts at Oprah.com the week of Jan. 12 to 16 every night at 9 p.m. EST.

“I definitely wasn’t setting an example,” she writes. “I was talking the talk, but I wasn’t walking the walk. And that was very disappointing to me.”