DISCOVER THE MULTIMEDIA P.O.R.O.S MUSEUM AND TRAVEL TO PORTUGAL WITH THE INTERNATIONAL SURREALISM NOW 2016 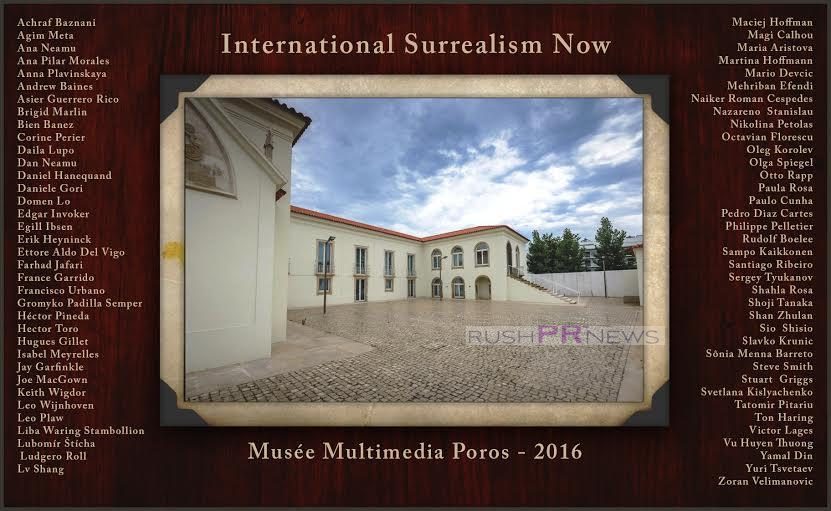 INTERNATIONAL SURREALISM NOW 2016 An art movement, dedicated to expressing the imagination as revealed in dreams, free of the conscious control of reason and convention

— Preparations for the largest World exhibition of contemporary Surrealism art in Europe have begun. Summer 2016 will host a new edition of the International Surrealism Now at the Multimedia P.O.R.O.S. Museum, in the village of Condeixa-a-Nova, in Portugal. International Surrealism Now is a project by Santiago Ribeiro, Portuguese surrealist painter, who has been dedicated to promoting the Surrealism of the 21st century, through exhibitions held in various parts of the world: Berlin, Moscow, Dallas, Los Angeles, Mississippi, Warsaw, Nantes, Paris, Florence, Madrid, Granada, Barcelona, Lisbon, Belgrade, Monte Negro, Romania, Japan and Brazil. Surrealism now is the union of visionary, surrealist, abstract, fantastic realism art movements. The participation of one of the most inspirational female artists around today, Shahla Rosa, a contemporary surrealist artist whose work is truly magical and of sculptor Isabel Meyrelles, historical figure of international surrealism. The exhibition consists of members from Santiago’s “International Surrealism Now” and members from several fantastic/visionary groups, Otto Rapp’s Visionary Art Network Liba Waring Stambollion’s Dreams and Divinities, and Brigid Marlin’s Society for the Art of the Imagination. Currently, 73 artists from 34 countries will be featured in the exhibit. The exhibition is composed of works of drawing, painting, photography, sculpture and digital art. More information can be found here: http://oneiricrealism.com/category/international-surrealism-now/

In addition to the Surrealism exhibit, discover the ruins of the Roman city of Conimbriga, the Monographic Museum of Conimbriga, and numerous attractions and monuments of this region rich in remains of all periods from prehistory to the twentieth century. The Napoleonic wars are also registered in this area. You can also enjoy the diverse and typical gastronomy that involves the entire region. ### ABOUT International Surrealism Now began in Coimbra in 2010, where a first major exhibition took place, organized by the Bissaya Barreto Foundation and conceived by Santiago Ribeiro. Since then, the event has been held in Conimbriga, on the occasion of the 50th anniversary of the Museu de Conimbriga (the second most visited museum in Portugal). After a show in Paris, with the support of the GAPP (Art Gallery Portugal Present) and Liba WS, once again organized by the Bissaya Barreto Foundation and Santiago Ribeiro, it moved to Madrid, with the support of Yamal Din, to Dallas, Los Angeles and Mississippi, with the support of the American surrealist artist Shahla Rosa, and also to Berlin, with the support of the Portuguese Consulate. Recently, the exhibition has been presented to the public in the medieval Palace of Ega with organization by Rede de Bibliotecas and the Municipality of Condeixa-a-Nova, at Vieira Portuense Gallery, in Porto, and Particula Coimbra, with the support of Bissaya Barreto Foundation, Portugal.