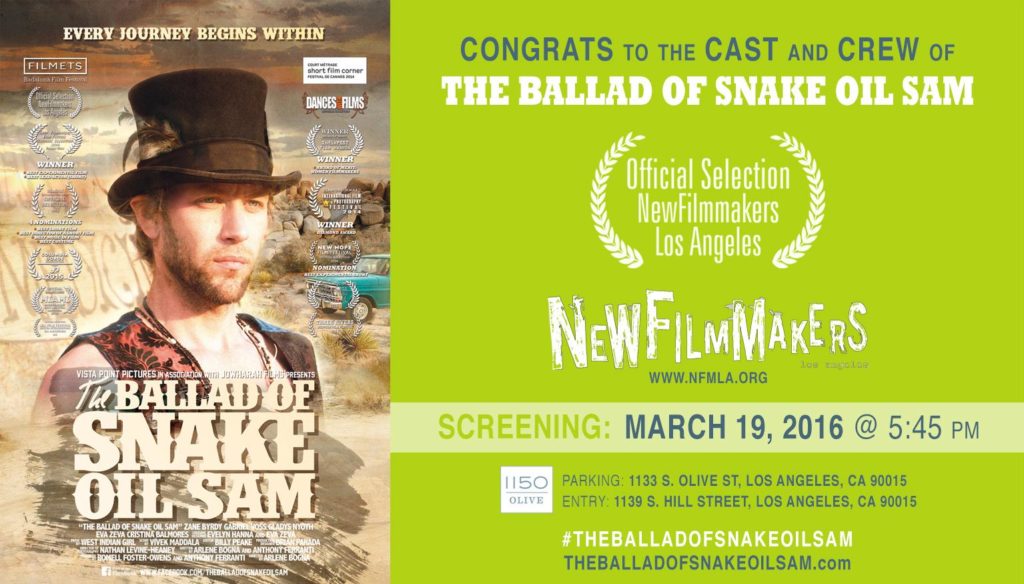 THE BALLAD OF SNAKE OIL SAM

An alchemist driven by ambition embarks on a mystical journey in pursuit of redemption.

Film screenings are open to the public and no rsvp is required. It is highly recommended to purchase tickets in advance at http://www.newfilmmakersla.com as they normally sell out.

providing the Los Angeles community of entertainment professionals and filmgoers with a constant flow of screening events.

NFMLA provides a creative forum where filmmakers can be recognized for their contributions, have open audience discussions about their productions and

connect with industry professionals for insight on film distribution, production, acquisition and representation.

“Part of the Alliance of Women Directors initiative with NFMLA, The Ballad of Snake Oil Sam is an off beat ride into the creative areas we seldom explore with captivating photography and

production design along with committed performances. This curious short film will engage you til the end”, Creative Director/Co-Founder, Susie Kim at NFMLA.

Arlene Bogna is a Powerful Female Voice in independent filmmaking today and gaining well-deserved attention in the movie industry and film director communities.

She is part of the “Support Women Filmmakers” movement and is in the Alliance of Women Directors,

the only non-profit organization solely dedicated to education, support and advocacy for women directors in the entertainment industry.

The U.S. Premiere of this Arlene Bogna Film began May 31st, 2014 at Dances With Films Festival in the Chinese Theater, Hollywood, California.

The Ballad of Snake Oil Sam made its debut screening on May 16th, 2014 to an enthusiastic reception at the Cannes Film Festival, Short Film Corner in Cannes, France.

harmonious cast of actors to portray many emotional states of mind, exploring trust and redemption relying solely on subtext and visuals.

The film also is an ode to famous director, Michelangelo Antonioni, with its remote scenery of the desert wilderness reflecting Snake Oil Sam’s inner struggles.

While soaking up picturesque desert scenery, fantasy characters and frontier-dream images with a hippy like vibe is a story told mostly with no dialogue but only distinct emotional events.

Truly a work of art, this Arlene Bogna Film will make your creative imagination soar and open it up to your own interpretation. .

The Ballad of Snake Oil Sam has won numerous awards worldwide, including the 2015 IndieFest Award of Merit for Women Filmmakers,