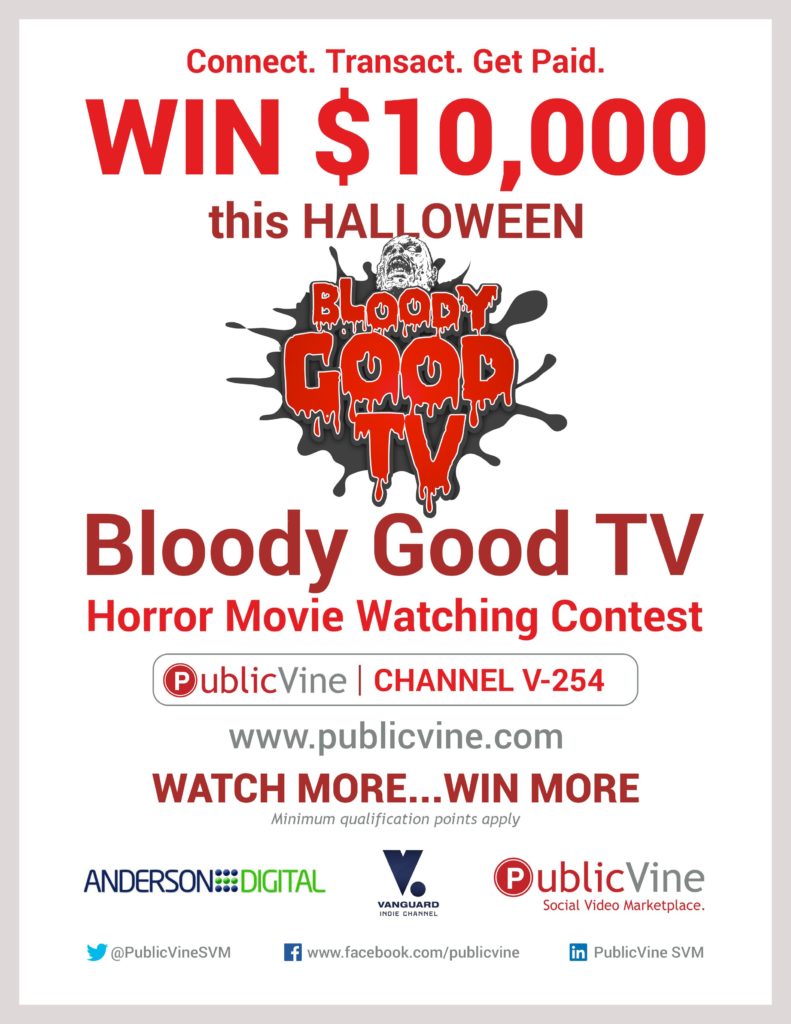 This Halloween, consumers can register to win up to $10,000 in Bloody Good TV’s Horror Movie Watching contest on channel V-254 on publicvine.com from October 24-31.

—PublicVine, the online and mobile social video marketplace, recently announced Anderson Digital’s “Bloody Good TV” Horror Movie Watching contest for $10,000 in cash prizes. PublicVine is the social video marketplace where video vendors and consumers can connect, transact, and get paid. Anderson Digital is the digital media arm of Anderson Media, the largest distributor of pre-recorded videos, music, and books in the USA.

To qualify to win $10,000, consumers simply register onto publicvine.com, go to Bloody Good TV, channel V-254, rent and buy as many horror movies as they can, invite others to do the same, and get a commission for each transaction. The highest performing consumers win a portion of $5,000 cash and also qualify to win an additional $5,000 in the “Top Video Consumer Contest” that ends December 2014. Registration is free for all consumers and they need not sign NDAs, exclusivity, or loyalty contracts.

Anderson Digital, owner of the Bloody Good TV brand and content, set up V-254 as a channel dedicated to horror movies to capture that unique but growing market. The Los Angeles-based content distribution and management company represents more than 50 studios digitally deploying over 5,000 TV shows and feature films. It distributes to all major digital platforms including Netflix, iTunes, Amazon, Hulu, VUDU and Xbox. Channel V-254 is the first of two channels Anderson Digital will launch this year on PublicVine. The second, Vanguard Indie Channel, will launch in November featuring award-winning movies purchased at top-ranked film festivals.

PublicVine’s patent-pending social video systems makes it more commercially scalable than Netflix, offers fairer vendor terms than YouTube, and, unlike iTunes, makes it possible for both vendors and consumers to get paid. Vendors set their own prices and have full control of their content.

According to Freyr Thor, Managing Partner at Anderson Digital, “We’re thrilled that PublicVine’s systems can provide exposure to our digital content with a social invite capability that could make our content accessible to over 3 billion smart phone and laptop users in over 200 countries. The worldwide reach represents a very interesting potential.” PublicVine is extending the same benefits to other video content aggregators (film festivals, distributors, studios), as well as video and filmmakers globally.

PublicVine was designed by Nam Mokwunye while a visiting scholar at Stanford University in 2009 and, in 2013, closed a $5.6m Series A equity investment round funded by Joel R. Anderson, Chairman of Anderson Media—the largest distributor of pre-recorded videos, music, and books in the USA. PublicVine launched in June 2014, is already revenue-positive, is transactional in 203 countries, and is registering video vendors the world over.

Anderson Digital, L.L.C., was launched with the acquisitions of SoPeachi Entertainment and Vanguard Cinema, two firms already well established in the digital content distribution and aggregation space. With these acquisitions, Anderson Digital has distribution capabilities in all segments of the digital marketplace, both domestically and internationally.  Current customers include not only the world’s largest digital music provider, but also companies including Amazon, CinemaNow, Hulu, Netflix, Sony Entertainment Network, Toys”R”Us Movies, VUDU and Xbox Video.

PublicVine (www.publicvine.com) is the online and mobile social video marketplace that enables video vendors and consumers to connect, transact, and get paid. Mokwunye designed PublicVine while a visiting scholar at Stanford University in 2009. In 2013, the company closed a $5.6m Series A equity investment round funded by Joel R. Anderson, Chairman of Anderson Media—the largest distributor of pre-recorded videos, music, and books in the in the USA. PublicVine launched in June 2014 and is registering video vendors the world over.

For additional information about PublicVine or to register for the Bloody Good TV contest,  please visit www.publicvine.com