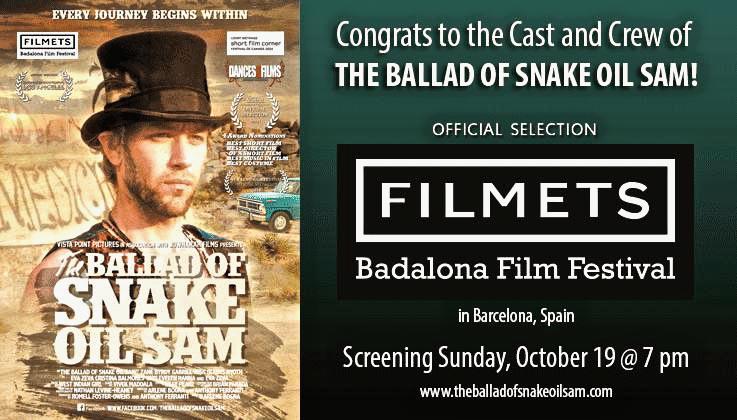 The U.S. Premiere of this Arlene Bogna Film, The Ballad of Snake Oil Sam, took place on May 31st, 2014 at Dances With Films Festival in the Chinese Theater, Hollywood, California. The Ballad of Snake Oil Sam made its debut screening on May 16th, 2014 to an enthusiastic reception at the Cannes Film Festival, Short Film Corner in Cannes, France. The filmmakers experience in France, provided them with a coveted filmmakers’ accreditation to the Cannes Film Festival; they were able to network at the Marche du Film, as well as the International Village with global financiers and distributors.
The Ballad of Snake Oil Sam captivates an audience of young and old alike, transporting you into the Wild Wild West with the inspiring mystical story of a desert traveler, inventor, alchemist and magical elixir salesman in pursuit of redemption. Emerging Filmmaker and Director, Arlene Bogna, had a unique vision for her undeniably daring, artistic and harmonious cast of actors to portray many emotional states of mind without words and to explore the meaning of trust, divine inspiration and the belief of redemption, relying solely on subtext and visuals.

The Ballad of Snake Oil Sam pays tribute to Sergio Leone’s “Spaghetti Western” genre through the film’s moments-in-between-moments with the actors and frontier cinematography. The film, shot entirely on location outside of Joshua Tree, California, also is an ode to famous director, Michelangelo Antonioni, with its remote scenery of the desert wilderness reflecting Snake Oil Sam’s inner struggles. The director Bogna says, “Our film crew went on a desert camping adventure, braving all the elements together as a strong tribe, in order to make it all happen!” It features the music of Los Angeles psychedelic rock band, West Indian Girl, from their latest album Shangri-La. The film’s original score is by Acclaimed film composer, Vivek Maddala. The Ballad of Snake Oil Sam stars Zane Byrdy, Gladys Nyoth, Gabriel Voss, Cristina Balmores, and Eva Zeva.
Arlene Bogna brings this film to life by uncovering the influence of snake oil and shamanic medicine that promises transformation and new beginnings, to the pivotal moment in Sam’s stirring realization of redemption, which can only be gained through the trust and acceptance of his tribe. The story told is a love letter to music subculture and the dance community, depicted with steampunk costuming and Native American jewelry and artifacts. Local designer, Evelyn Hanna from Funky Desert Apparel in Yucca Valley worked on the costume design.
Bogna challenges herself as a film director to tell the story without depending on words and experiments with creating metonymy for her characters in the middle of a desert. She crosses over from being a successful commercial director into narrative, and also breaks the mold of what time period this film is supposed to take place in. She makes her movie feel anachronistic and timeless with imaginative sequences, dreamlike visuals and costumes. She believes in the Hero’s journey as a timeless structure of mythmaking and cinema. Arlene Bogna wants to make her contribution to film in an “Ars Longa, Vita Brevis” way and figure out whether Art imitates life or not.
While soaking up picturesque desert scenery, fantasy characters and frontier-dream images with a hippy like vibe is a story told mostly with no dialogue but only distinct emotional events. Truly a work of art, this Arlene Bogna Film will make your creative imagination soar and open it up to your own interpretation. The themes in the film keep you thinking about big life questions of trust; redemption and what will Snake Oil Sam do next? Hungry for more? The filmmaker purposely did this to bring in the character of Snake Oil Sam as a cameo in her next feature western, Amaryllis Bang! Bang! The director envisions her upcoming film productions to convey sweeping epic vistas, mind-blowing moments, and colorful dynamic shots. Arlene Bogna is ready to take this show on the road, and she already is.
To purchase tickets for the Barcelona screening at FILMETS Badalona Film festival, visit their website FILMETS: http://www.festivalfilmets.cat/es/
The Ballad of Snake Oil Sam is an official selection and winner of Best Experimental Film and Best Actor in a Short Film, nominated for Best Supporting Actress in a Short Film, at the 2014 Lady Filmmakers Festival. The Ballad of Snake Oil Sam was also nominated for 4 Awards at the 2014 Madrid International Film Festival for: Best Short Film, Best Director of a Short Film, Best Music in Film and Best Costume. Bogna is planning to get international distribution of this film, on cable and digitally. View all film updates at http://www.TheBalladofSnakeOilSam.com Watch the trailer on Vimeo at http://arlenebogna.com/The-Ballad-of-Snake-Oil-Sam
About Arlene Bogna and Vista Point Pictures
Arlene Bogna is an award-winning writer/director with a passion for character-driven storytelling and compelling visuals. Visit her website at http://www.arlenebogna.com Vista Point Pictures is an award-winning production boutique committed to narrative films, visually compelling commercials, new media, promos and viral campaigns. For more information, visit http://www.vistapointpictures.com Jowharah Films is an award-winning production company of which Romell Foster-Owens is President. For more information, visit http://www.jowharahfilms.com The Ballad of Snake Oil Sam is directed by Arlene Bogna and Produced by Romell Foster-Owens and Anthony Ferranti; the Cast stars: Actors, Zane Byrdy, Gladys Nyoth, Gabriel Voss, Cristina Balmores, and Eva Zeva.
#####
For media inquiries and interview opportunities, Contact:
Nicolette J. Fontaine, Unit Publicist/Social Media Manager at Discovery Media & Marketing
Office tel. 561.302.7782  ~  Twitter @DiscoveryMM  ~   Email: nicolettefontaine@comcast.net