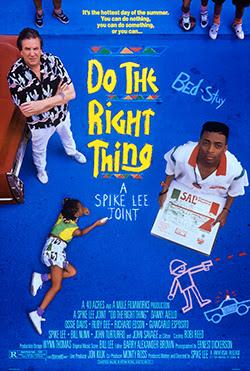 The Academy of Motion Picture Arts and Sciences will celebrate the 25th anniversary of the seminal film “Do the Right Thing” with writer-director Spike Lee and members of the film’s cast and crew at two special screening events: onJune 27 in Los Angeles at the Bing Theater, and on June 29 in Brooklyn at the BAM Harvey Theater.

5 p.m. on the Steinberg Screen at the BAM Harvey Theater

Moderated by Khalil Gibran Muhammad, director of the Schomburg Center for Research in Black Culture

The Academy will also host the screening series “By Any Means Necessary: A Spike Lee Joints Retrospective,” beginning with a screening of “25th Hour” (2002) on Thursday, June 26, at 7:30 p.m. at the Academy’s Linwood Dunn Theater in Hollywood. The evening also marks the opening of the photography exhibit “WAKE UP! David C. Lee Photographs the Films of Spike Lee,” in the theater foyer through September.

“By Any Means Necessary: A Spike Lee Joints Retrospective” continues July 11–27 at the Linwood Dunn Theater and the Bing Theater in Los Angeles, and June 29–July 10 at BAMcinématek in New York. Please visit oscars.organd BAM.org for more information.

The Academy of Motion Picture Arts and Sciences is the world’s preeminent movie-related organization, with a membership of more than 6,000 of the most accomplished men and women working in cinema. In addition to the annual Academy Awards—in which the members vote to select the nominees and winners­—the Academy presents a diverse year-round slate of public programs, exhibitions and events; provides financial support to a wide range of other movie-related organizations and endeavors; acts as a neutral advocate in the advancement of motion picture technology; and, through its Margaret Herrick Library and Academy Film Archive, collects, preserves, restores and provides access to movies and items related to their history. Through these and other activities the Academy serves students, historians, the entertainment industry and people everywhere who love movies.