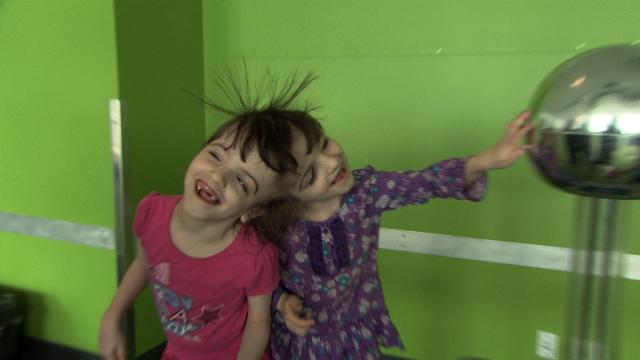 Documentary from Entertainment One Television Airs

Twin Life: Sharing Mind and Body captures a year in the life of 7 year old conjoined twins Tatiana and Krista Hogan. Joined at the head, they were given only a 20% chance of survival at birth, but these girls continue to defy the odds, confound doctors and move beyond developmental milestones once thought impossible.

The documentary unravels the mystery of Tatiana and Krista’s astonishing brain connection. They are the only known twins in the world who can see what the other sees and feel what the other feels.  Their family also believes they share the sense of taste, and can even send thoughts back and forth.   That’s because of a neural bridge between each girl’s thalamus – a part of the brain that regulates consciousness and relays sensory and motor signals.  An MRI test suggests the twins can sense, and perhaps even control one another’s limbs.

Twin Life: Sharing Mind and Body follows major events in the twins’ lives, including the beginning of grade two, Halloween, their seventh birthday party and a medical trip to Vancouver.  Because of their conjoined state, the girls face myriad health problems – including epilepsy and heart concerns.

As our cameras follow daily life at home, we see how the large extended Hogan family takes all the challenges in stride, determined to give the twins as normal a life as possible. And we watch as two rambunctious little girls overcome the obstacles, thanks to a loving family who regard them as a blessing.

“These little girls are just so happy, loving and sweet,” said producer/director Judith Pyke.  “They handle their circumstance and every day with such sparkle.”

About eOne Television
eOne Television develops, produces, acquires and distributes programming across all genres. eOne handles international distribution for original scripted series from AMC (including upcoming dramas Turn and Halt & Catch Fire) and Sundance Channel (including upcoming series The Red Road). The company is the studio and international distributor behind the AMC series, Hell on Wheels, and along with Fox International Channels, in addition to the international distributor for the zombie-phenomenon, The Walking Dead.  Some of eOne’s current slate includes Discovery Channel’s mini-series starring Sam Shepard, Klondike; exciting new werewolf drama, Bitten on Syfy and Space; suspense-drama starring Thandie Newton, Rogue on DIRECTV; popular hit series Haven on Syfy and Shaw; action-packed drama series Rookie Blue on ABC; hit reality series The Sheards on BET and Mary Mary on WEtv; preschool-phenom Peppa Pig on Nick Jr.; and a series of specials of Big Surprise on E! Entertainment featuring stars such as Nick Cannon and Macklemore.

Entertainment One Ltd. (LSE: ETO) is a leading international entertainment company that specializes in the acquisition, production and distribution of film and television content. The company’s comprehensive network extends around the globe including Canada, the U.S., the UK, Ireland, Spain, Benelux, France, Germany, Scandinavia, Australia, New Zealand, South Africa and South Korea.  Through established Entertainment and Distribution divisions, the company provides extensive expertise in film distribution, television and music production, family programming and merchandising and licensing. Its current rights library is exploited across all media formats and includes more than 35,000 film and television titles, 2,800 hours of television programming and 45,000 music tracks.

Through strong relationships with broadcasters and content providers, eOne Television International has successfully sold eOne’s original and third-party productions to over 500 broadcasters in 150 countries, including key US networks and international pay TV channels.

About the Producers
Judith Pyke is an award winning producer/director/writer. Her work has appeared on History Television, CBC, CTV, Bravo and other networks in Canada and internationally.  Productions include Rodeo: Life on the Circuit, which received a 2011 Gemini Nomination for Best Documentary Series and won a 2011 AMPIA Award for Best Documentary Series.The Gayest Show Ever won the Banff International Pilot Award. In 2008, she received a Kaiser Fellowship for Global Health Reporting for her reporting on HIV & Peacekeeping in Africa.