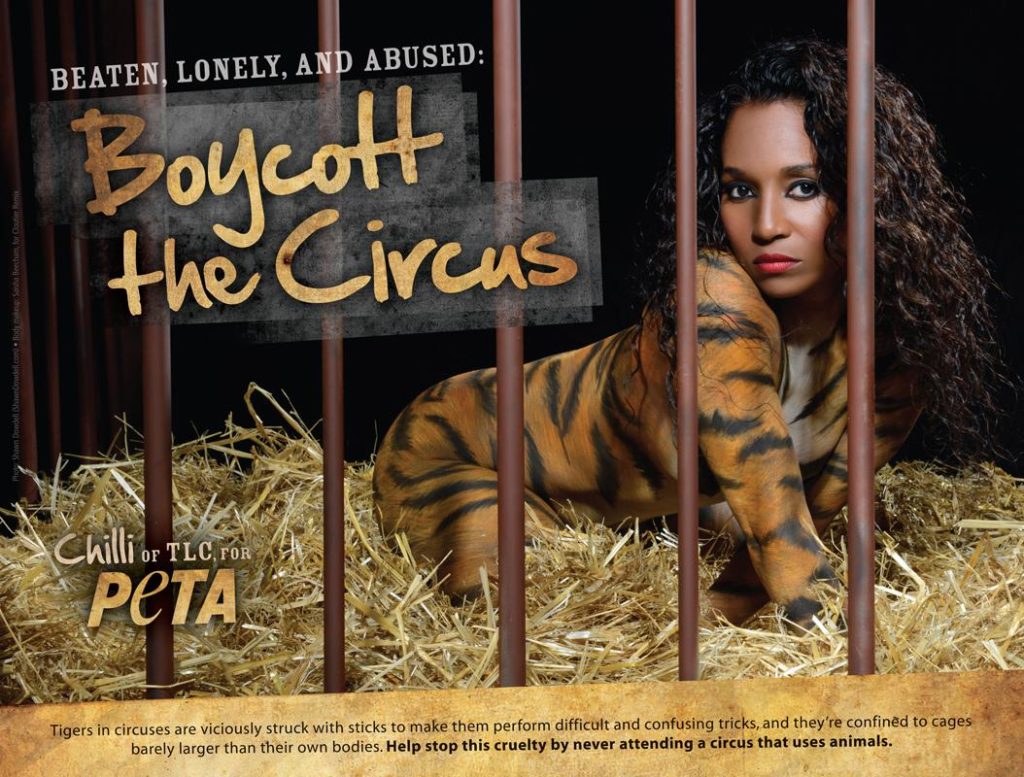 — Crouched inside a cage and wearing nothing but striped bodypaint, Chilli of the multiplatinum trio TLC is the star of a provocative new ad campaign for PETA that demands, “Boycott the Circus.” The ad, which be can reviewed here, reveals that tigers used by circuses are beaten into submission—and when they’re not “performing,” they’re locked away in cramped, filthy cages.

“There’s so much cruelty behind the scenes, which is a something that a lot of people don’t get to see,” Chilli explained in an exclusive PETA interview. “They’re being mean to them to make them do this trick .… And I think that everybody needs to be aware of what’s really going on.”

That’s why Chilli was willing to strip down for the cause. “If you can raise awareness to something that’s important, such as this, then you should,” she says. “Because I know for a fact that I would never want to be in a cage.”

Circuses deprive tigers of everything that is natural and important to them, including interacting with their families, foraging and hunting for food, and roaming for miles. Tigers used by circuses are locked in small cages and warehoused in traveling boxcars, where they are exposed to extreme heat and freezing-cold weather. These unnatural and stressful conditions lead tigers and other big cats to become ill, despondent, and increasingly agitated, endangering other animals, circus workers, and attendees.

Chilli joins a growing list of celebrities—including Alec Baldwin, Jada Pinkett Smith, Olivia Munn, Cloris Leachman, Sarah Silverman, and Edie Falco—who have teamed up with PETA to speak out against circuses that use animals.

For press interviews with Chilli regarding her PETA campaign, please call Christal Jordan at 678-499-0297 or email christal@enchantedpr.net