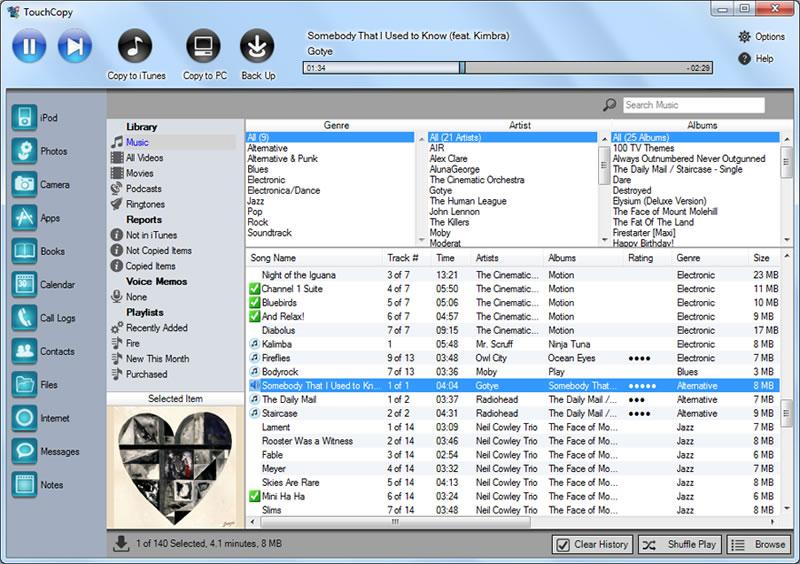 UK based software developer, Wide Angle Software have announced the update to their flagship software TouchCopy to enable users to retrieve data from Apple’s newly released iPhone 5S and 5C. The software is fully compatible with the new iOS7 operating system and iTunes 11.1. Offering full Windows and Mac OSX compatibility, including Windows 8 and Mac OSX 10.9, TouchCopy will backup and recover music, photos and other data from all models of iPhones, iPods and iPads.

TouchCopy is a Windows and OS X app, first released in 2005 as iPodCopy by Wide Angle Software. In the early days, iPodCopy supported backup of music for traditional click wheel iPods only. Since rebranding iPodCopy to TouchCopy, developers at Wide Angle Software have released many software updates, constantly keeping up with the newly released iPod, iPhone and iPad models. The latest version 12 of TouchCopy adds support of iPhone 5S and 5C, as well as keeping compatibility with older models including the iPhone 3G, iPhone 4 and 5. TouchCopy enables backup of music, playlists and videos to iTunes as well as the ability to copy photos, SMS, MMS, iMessages, contacts, calendars, notes and books.

Users have found TouchCopy particularly useful when dealing with iTunes data loss resulting from a hard drive failure or when switching to a new computer without a backup. The software’s ability to do a fast retrieval and transfer of music, playlists, photos, apps and other content from an iOS device to a new iTunes library has often been praised by many users of TouchCopy.

What Users Say about TouchCopy

“I found this to be a GREAT “Insurance Policy” for protecting your iTunes/iPod/iPhone Music Library!” – Larry J. Burton via Facebook

“YOU JUST SAVED ALL MY KIDS BABY PICTURES!!!!!! We lost our tower in a flood, and I had them all saved on my iPod, and because of TouchCopy I have them back! Thank you thank you thank you!!!” – Sarah D. Schuler via Facebook

“I have a new laptop!! And thanks to TouchCopy for retrieving everything from my iPhone” – Tim via Twitter

The free version of TouchCopy available immediately on Wide Angle Software’s website http://www.wideanglesoftware.com/touchcopy provides limited free functionality including 100 free transfers of songs and videos and free backup of apps. The full version of the software costs $29.99 and allows unlimited use of the software, with free upgrades for life. Currently, TouchCopy is available at an introductory discount of 10% off, use promo code:  TC10PERCENT at checkout to get TouchCopy for just $26.99 (normally $29.99) at http://www.wideanglesoftware.com/touchcopy/purchase.php.

For more information and the full lists of features see the website: http://www.wideanglesoftware.com/

Wide Angle Software believes software should be easy to use, look good and above all be useful to a wide range of consumers. The firm specialises in PC and Mac software for manipulating digital media, specifically on portable media devices such as iPods, iPhones and iPads.