Lexus IS Launch Spots Encourage Consumers to Blend Out 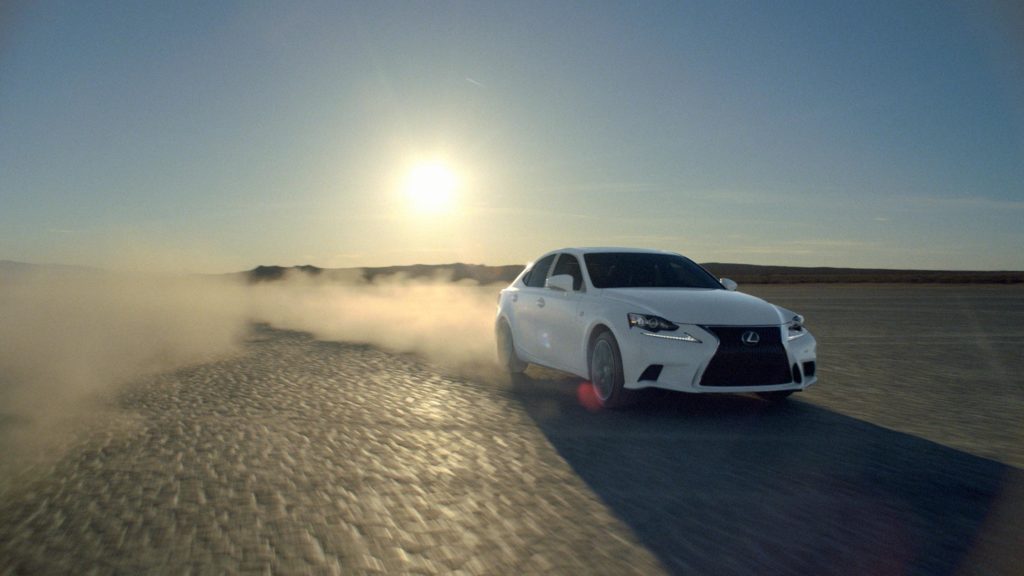 The Lexus “Color Shift” spot shows it’s more fun and exciting to blendout than blend in.  — To launch the entirely new 2014 Lexus IS sport sedan, the automaker today debuts three new television spots comprised of iconic, stylized visuals designed to be provocative. The strikingly different IS, which will arrive in showrooms this July, is the latest vehicle in the Lexus lineup to showcase the brand’s commitment to bold and dynamic design. Like the new IS, the supporting TV spots are a deliberately defiant departure from the status quo.

“This third-generation IS features the bold new styling and dynamic driving characteristics now inherent in the Lexus lineup and the new ads reflect that excitement,” said Brian Smith, vice president of marketing for Lexus. “The TV spots capture the emotion engineered into the IS and challenge customers with ‘It’s Your Move.’”

Celebrating the independent spirit of the IS, two new general market spots, created by Lexus’ agency of record, Team One, use music, fashion, and contrasting colors to make a purposeful statement. Emotions in the two spots are polarizingly different as they showcase the serious yet playful faces of the IS.

In “Crowd,” a vast throng, dressed head-to-toe in black, pulses to a steady, anthemic song at an open-air concert. An attractive man and woman, both dressed in white, catch the other’s glance and push through the crowd until they meet. They join hands and, together, move against the current of the crowd. The bold, distinctive spindle grille of a white IS F SPORT is revealed as the couple reach the car and climb in. Donned in white, the three are destined to escape the sameness of the pack. The IS F SPORT peels away and heads to the open desert, the antithesis of the crowd, where complete freedom and independence reign. The spot emphasizes that things designed to draw a crowd are good, but leaving the crowd behind is more rewarding.

The second spot, “Color Shift,” shows it’s more fun and exciting to blend out than blend in. A white IS F SPORT speeds through a graphic white background, passing a series of tableaus: A woman dressed in white twirls a white umbrella with confidence, a man wearing a white top hat jams on a white guitar, and chic white clocks, turntables and bicycles pepper the environment. The spot cuts to a black IS 250 driving through a similar black background with parallel stylized moments. Dressed head-to-toe in their respective world’s color, two women give each other a confident high five as they, alongside the IS vehicles, dramatically cross into the contrasting world. Both the women and the cars are beautiful when they blend in, but exquisitely stand out when they dare to be different.

Original music from Devo’s Mark Mothersbaugh punctuates the hyperstylized, rock & roll look and feel of the spot. It punches and pops. The cars become characters themselves, equal to the people living in the contrasting worlds, and demonstrate the elevated experience of driving the new IS. The injection of culture in both spots comes to life through the lens of renowned Swedish film and music video director Jonas Åkerlund. His wife, B Åkerlund, brings a sophisticated level of styling to the spots, creating angular, iconic looks with contemporary yet timeless clothing and accessories.

Two additional spots, created by Lexus’ multicultural agency, Walton Isaacson, are part of the broadcast campaign as well. “This is Your Move” is geared to the African-American audience. Set in an industrial environment, the spot features Los Angeles Dodgers center fielder Matt Kemp as he searches for something that matches his ambitious and driven personality. He finds the 2014 IS 350 F SPORT and takes it on an aggressive drive as the spot intercuts with an attractive woman dancing with her IS 250. The quick cuts, seductive imagery and pulsing music portray the IS as an item of desire. “Intense” is targeted to the Hispanic audience and follows a young couple as they experience the thrills of driving the redesigned IS 250. Their enthusiasm from the moment they slide into the car illustrates that the IS offers an intense driving experience like no other.

“Crowd,” “Color Shift” and “This is Your Move” will air on NBC during this year’s U.S. Open Championship. “Crowd” will also be running in cinema beginning June 21, with “Intense” and additional Lexus IS marketing campaign elements launching in the coming months. The spots, as well as a unique behind-the-scenes series that serves as an extension of the campaign, can be viewed atYouTube.com/LexusVehicles.

About Lexus
Lexus launched in 1989 with two luxury sedans and a commitment to pursue perfection. Since that time, Lexus has expanded its line-up to meet the needs of global luxury customers. In every vehicle, Lexus incorporates innovative technologies, high-quality designs and luxury materials. With numerous models featuring Lexus Hybrid Drive, Lexus is the luxury hybrid leader and is dedicated to developing vehicles that are kinder to the Earth. Lexus’ current vehicles incorporate outstanding driving dynamic characteristics and feature a new design language that includes a spindle grille and distinctive lights, creating a signature look and feel for the luxury brand. In the United States, Lexus models are sold through 232 dealers who are committed to exemplary customer service.