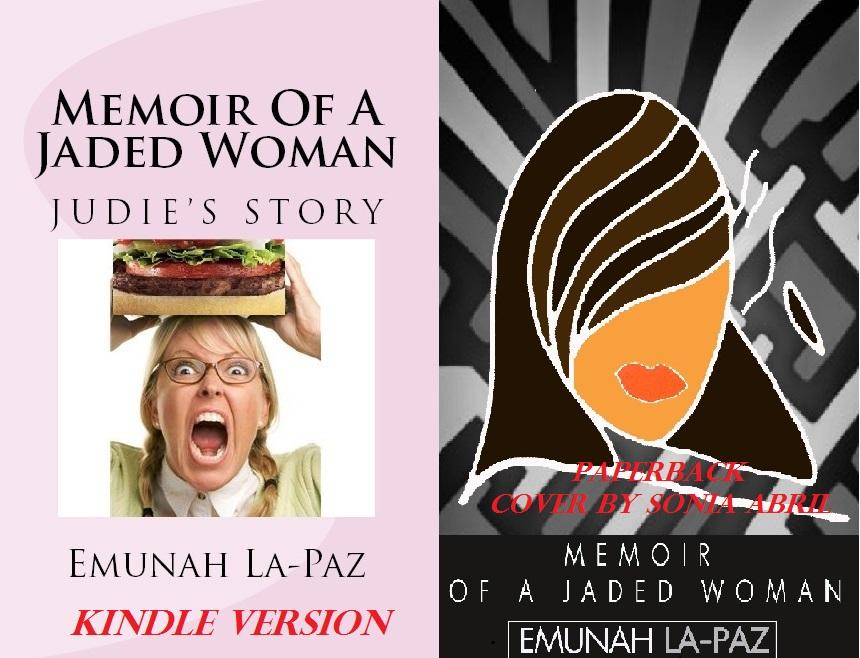 The novel ‘Memoir of A Jaded Woman, Judie’s story’ Is about a supermodel that goes insane after she discovers that her husband has been having an affair with a woman who works at a fast food restaurant. In the heat of anger Judie looks nothing like a fashion model when she confronts her husband; by throwing a hamburger at her unfaithful spouse she spins out of control into a messy divorce.

Author Emunah La-Paz also adds in events from Catalina, Abella, and Gabriella, three Latina fashion models that are deceived through their unfaithful relationships by an unlikely source.

‘Memoir of A Jaded Woman Judie’s Story’ Is now available on through the Amazon.com Hispanic database on Kindle.

The kindle cover showcases an image of the disturbed supermodel in action as she throws a hamburger at her unfaithful spouse. Judie, looks nothing like a fashion model at this hurtful time in her life.

The paperback version showcases the image of woman jaded in a contrast of bold color designed by Hispanic artist Sonia Abril. The book release is due out July 1, 2013.

The kindle version is now available on amzon.com, a spin off from the hit book, ‘Why Do Married Men Cheat With Unattractive Women?’

Expert: When I found out that my best friend’s husband was unfaithful, I was shocked!

After all, my attractive friend (who we will call “Judie”) is a gorgeous model – and she knows how to turn heads.

I was with Judie when she located the other woman’s picture online, and how can I put this…the other woman had a face that only a mother could love. It was visibly noticeable that this woman was out of shape – and not by a couple pounds, mind you!

The other woman was a brick community house! She also had bad skin and had obviously missed a couple trips to the dentist. The other woman simply did not take pride in her appearance. To be honest, I was a little disappointed to see the results. I had figured if Judie’s husband cheated on her, then the other woman must have been drop dead gorgeous!

Sadly, I got to wondering, why do married men cheat with unattractive women?

Read the end result in ‘Memoir Of A Jaded Woman, Judie’s story’ Now on Kindle through Amazon.com.