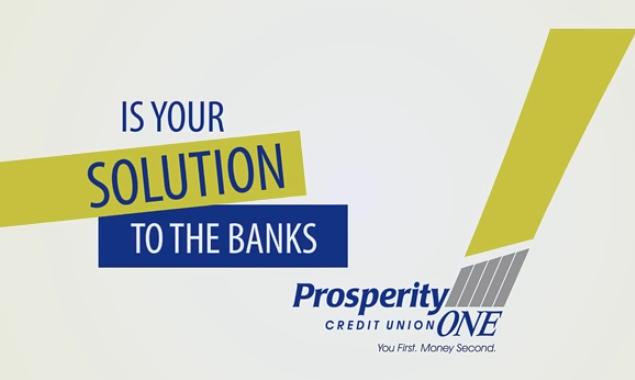 In today’s challenging economy being able to rely on a financial agency that represents your interests becomes exceedingly important in the quest to achieve your financial goals – but the search for a bank you can trust can be very difficult. National banks have a tendency to protect their own interests as global economic pressure rises and they often lose sight of the need to represent their clients as a first priority.

Prosperity ONE is a member-owned credit union that invests in the financial success of their clients over the long term. They stand apart from traditional banks which are based more on large volumes of clients than the success of a small community of members. Whether it’s banking, borrowing, insuring or investing, credit unions like Prosperity ONE make it a top priority to keep the best interests of their individual members in mind, and often are able to offer more personalized financial attention. In comparison, national banks often have big budgets to dedicate to branding and mass media advertising in order to form that perceived personal connection with their clients. So when standing head-to-head against a national bank in the advertising arena, that same personal reliance on one-on-one relationship building can leave the local credit union’s branding and limited location restrictions at a competitive disadvantage.

Focusing on Prosperity ONE’s member-owned structure and highlighting their attention to individual member needs was how Creative Bube Tube helped set the credit union apart in 2012. In fact, the first campaign was so successful that Prosperity ONE engaged the advertising agency to incorporate an additionally motivating contest offering into their second television campaign. By presenting a competition to win a 500 GIC, Creative Bube Tube knew this would be a key addition to help drive new client leads for Prosperity ONE.

“Contesting is a key component in the next generation of successful television advertising” states Jenny Munford, Agency founder, CEO and CCO. “With more people watching television with a second device – be it an iPad or a smart phone, the rates of response measured in website visits driven through TV campaigns has skyrocketed. Harnessing this increased directed traffic with the power of a contest is the optimal way of turning this influx of website visitors into leads, which can then be marketed on an ongoing basis and even contacted with special offers.” Strategically it’s a big win, and only one of the many ways that Creative Bube Tube is helping revolutionize the television advertisement industry with best practices that can help both small players and big players alike. “It’s so affordable, almost any business can afford TV paired with social media, and the benefit of both of these elements working in partnership has benefits that neither could achieve on their own” states Mrs. Munford.

Prosperity ONE’s TV commercial is presently airing on Rogers TV listings in Milton, Hamilton, Oakville, Burlington and is advertised online on the Weather Network. The contest ends May 26, 2013.

With representation from east to west in both the United States and Canada, Creative Bube Tube is a television and social media agency serving medium to large clients from across the globe in sports, pharmaceutical, health & lifestyle, food and beverage, automotive and many other industries. From creative ideation to results, Creative Bube Tube has produced over 400 television campaigns since opening in 2006. To learn more about the power of TV advertising and how Creative Bube Tube can help your business grow, email jenny@creativebubetube.com or call 1-855-282-3882 today.