“At Fenway” with Brian Evans & William Shatner nails over 100,000 views on YouTube in 2 weeks 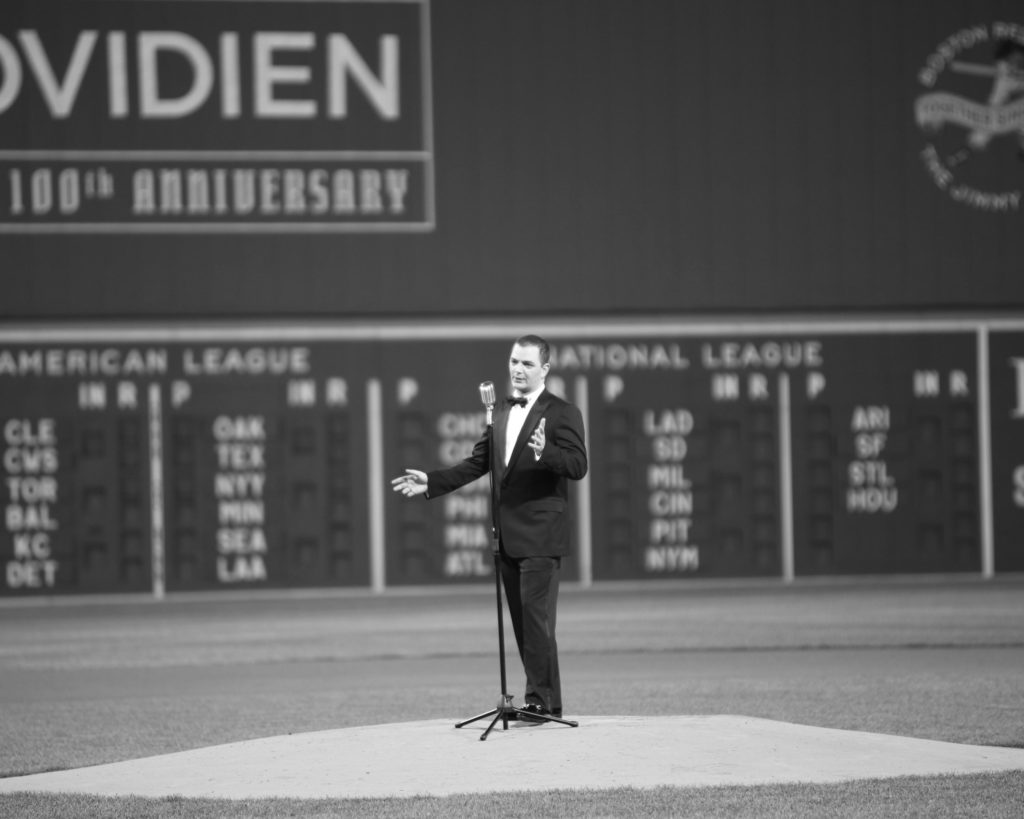 After the Facebook posting of Boston Red Sox superstar David Ortiz on his personal Facebook page, and Major League Baseball following in his footsteps, the homage to Fenway Park, “At Fenway,” by Brian Evans and William Shatner, has seen it’s video go “viral” on YouTube, with more than 100,000 views on the popular social networking video website.

“We’re floored,” says Biltz. “We never imagined we’d get over 100,000 views before the video even fully launched, which it will on April 9th.”

“The Boston Red Sox said they would also be putting it on their Facebook and Twitter, but we’re just waiting for them to do so,” laughs Evans. “I’m sure putting a winning team on the field is their first priority.”

The song also got a boost when it was featured on The Today Show last week. It’s host, Matt Lauer, was seen laughing at Shatner’s portrayal as the umpire.

Evans says he was told the video would also play at the park.

“At Fenway” is now the first full length music video ever to be filmed at Fenway Park in it’s history, and now it is Brian Evans who holds that historic title as the only artist ever to do so. It will be added to the library of The National Baseball Hall of Fame. MLB Commissioner Bud Selig has also received the new music video “directly from the new home plate umpire at Fenway Park,” says Evans.

For more information on Brian Evans, visit www.brianevans.com. For information about Helen Bousquet, his mother, visit www.helenbousquet.com. Actor Tom Hanks introduces his mothers website, after she passed away following what was supposed to be a routine knee surgery at The Holy Family Hospital in Methuen, Massachusetts (a Steward Health Care System hospital).

“I will do whatever I must to bring attention to her, and to make sure her loss saves others. I am thankful that Mr. Ortiz and MLB have so far shown her the respect that she deserves. I’m now waiting for The Boston Red Sox to do the same.”

Evans is thrilled about his newfound fame as the only artist ever to film a full length music video at Fenway Park.

“I always knew what I was going for here. It wasn’t to make a bunch of money, it was to make history. I was doing it while no one even realized that that is what I was doing. As a singer, you look for that one thing that will separate you. While people were laughing at me, I took pride in knowing that the video would be around longer that those who laughed at me for doing it.”

“As Katt Williams said, if you don’t have haters, you’re doing something wrong,” laughs Evans.

The video promotes Evans new CD, “Brian Evans – At Fenway,” now available at Wal-Mart, Best Buy, Newbury Comics, and Barnes & Noble. It’s also headed for Target stores nationwide. The package includes an 11 song CD, the DVD of the music video with multiple special features, and a Commemorative Booklet that features over a dozen photo’s and captions. It is also available on ITunes in digital form, though the Commemorative Booklet is only available in the physical product.

Autographed copies by Evans are available at his website, www.brianevans.com.

“This will be the go-to gift for holiday gift giving and Red Sox fans alike, no doubt,” says Biltz.

William Shatner and Brian Evans will appear for various promotional appearances in support of the new product, and both will soon be announcing concert dates in Boston and other markets.