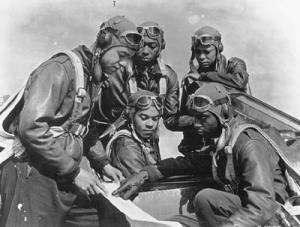 Fowler served as the organization’s spokesperson in 2012 and her representation provided exposure on a national scale resulting in an increase in donations for the foundation.

Miss Fowler coordinated the appearance of 10 Documented Original Tuskegee Airmen and their guests at the 43rd NAACP Image Awards televised on NBC and additionally served as a presenter at the pre telecast awards program. She represented the Foundation at the pre-screening of the movie “Red Tails” at 20th Century Fox Studios and at the pre- showing of the movie at the Rave Theatre in Los Angeles.

During 2012, she made guest appearances at prominent events, including NBCUniversal Salute to African American Pioneers in the Military; Jackie Robinson Day at Dodgers Stadium; Northrup Grumman Celebration of Black History Month; and at the Tuskegee Airmen Scholarship Foundation’s Gold Medal Gala at the Skirball Cultural Center.

La Trycee conducted several radio, newspaper, and magazine interviews and produced a 90 second commercial promoting TASF to the general public and to federal employees during the annual Combined Federal Campaign.

“It’s an honor to be brought back on board with TASF for another year,” La Trycee said. “I am looking forward to working with the Airmen and the Scholarship Foundation again and raising more money than ever before for the deserving students who want to further their education.”

Originally from Dale, VA, La Trycee graduated from Virginia Commonwealth University with a Bachelor of Science in Psychology and a concentration in Pre-Medicine and Applied Psychology. She then relocated to Hollywood, CA where she has appeared in several commercials, television shows, and films. She created, directed, and executive produced the award winning web series “Hope”.

Most recently, Miss Fowler served as the Mistress of Ceremonies for the entertainment program at the 14th annual Dr. Martin Luther King, Jr. Holiday Celebration sponsored by the San Gabriel Valley Branch of the NAACP on January 21, 2013 at the West Covina, CA Civic Center.

For additional information on La Trycee Fowler, go to: http://latryceefowler.yolasite.com.

For information on the Tuskegee Airmen Scholarship Foundation, go to: www.taisf.org.