One Million Moms For Gun Control Responds To NRA 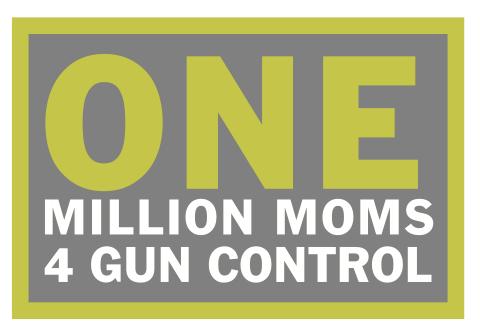 ONE MILLION MOMS FOR GUN CONTROL RESPONDS TO NRA

The gun control advocacy group One Million Moms for Gun Control sent a letter to National Rifle Association CEO Wayne LaPierre today prior to his Fri., Dec., 21 press conference asking him to make a promise to the mothers of America: Acknowledge that the mass shooting in Connecticut last week wasn’t an isolated event, but the product of an epidemic of gun violence in America.

“The nation is reeling from the tragic massacre in Newtown. The loss of 20 innocent children and 6 brave adults can only be responded to with compassion and a call for change,” said Shannon Watts, founder of One Million Moms for Gun Control. “Please, Mr. LaPierre, work with us to create reasonable and enforceable gun laws that will allow us to safely send our precious children out of our arms and into their schools, movie theaters, malls, and universities.”

The letter to Mr. LaPierre is also being sent by all members of One Million Moms for Gun Control to the White House, Congressional representatives, mayors, and state and local legislators through www.blastroots.com/campaign/1-million-moms-for-gun-control.

One Million Moms for Gun Control is not against guns, but against the proliferation of military-type weapons that have been allowed into society with too little oversight. Specifically, the organization is asking for:

1) The reinstatement of the ban on assault weapons and related magazines. These weapons are clearly not the weapons of choice for hunters.

3) A common sense approach to the amount of ammunition that can be purchased.

4) Boundaries on the scope of concealed weapons laws at the state level.

“There are 84 million mothers in the United States and just 4 million NRA members. Our organization has in less than seven days established over 50 local chapters across the United States. The rapid growth of social media and the organizing power of the Internet will ensure our success,” said Watts. “It is said that a mother’s love for her child is unstoppable; be sure that One Million Moms for Gun Control is as well.”

The tool enabling social media outreach to Congress is provided by BlastRoots, a privately-held, non-partisan, advocacy technology company that provides an automated online grassroots lobbying tool to anyone who wants to influence government.

About One Million Moms for Gun Control:

One Million Moms for Gun Control was created to reduce senseless acts of gun violence, much like Mothers Against Drunk Driving was created to reduce drunk driving. One Million Moms for Gun Control is demanding common sense solutions to the lax gun laws and loopholes that have resulted in a dangerous proliferation of deadly weapons. The organization was formed in the immediate aftermath of the Sandy Hook Elementary School mass shooting in Newtown, Ct., on December 14.