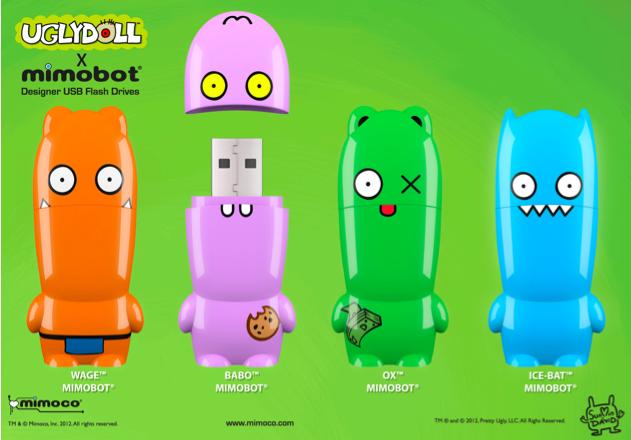 The Cute and Ugly Designs of Pretty Ugly’s Uglydoll™ Franchise Cross-Over into the Realm of the MIMOBOT® Collection!

Wage™ MIMOBOT® features the character that started the Uglydoll phenomenon. Co-creator David Horvath originally drew Wage at the bottom of a love letter to his then-faraway girlfriend, Sun-Min Kim. Love made it all possible when Miss Kim responded by sewing a plush doll of the design and sending it back to Mr. Horvath. Now that Wage is a MIMOBOT USB flash drive, David and Sun-Min can share up to 64GBs of loving designs with each other!


Other great Uglydoll designs in the Uglydoll X MIMOBOT Series include the blue and toothy Ice-Bat™ MIMOBOT, the pink and always hungry for cookies Babo™ MIMOBOT, and the knocked-out and loaded OX™ MIMOBOT. Your ‘bot may not win a beauty competition, but these little uglies are all heart while loving you and your data!

“The Uglydoll X MIMOBOT collection stars some of our favorite contemporary indie characters of all time,” says Scott Seraydarian, Director of Media at Mimoco. “The Ugly philosophy promoting love, friendship and cuteness (…even in an ugly way) is a perfect fit for Mimoco. We’re extremely excited to collaborate with David Horvath and Sun-Min Kim on their signature brand and can’t wait to share our crossover series with Uglydoll fans around the globe.”

“Fans now have a place to store all of their amazing Uglydoll photos! We won’t be surprised if they scoop them all up and display them on a shelf, they are simply that awesome! We are excited for this launch in the Mimoco booth at the New York Comic Con and are thrilled to have our first collection of MIMOBOT.” says Alita Friedman, Pretty Ugly Partner and Chief Brand Officer.

Boston-based design house Mimoco fuses the art of contemporary characters with the functionality of personal data storage devices and is well known in both the pop-culture driven Art Toy underground and the high-tech electronic world. The MIMOBOT USB flash drive line includes original characters and licenses from Star Wars, Hello Kitty®, and DC Comics™, to pop-artists like Gary Baseman, David Horvath, and FriendsWithYou™. MIMOBOT flash drives are available in up to 64GB capacities, are Mac and Windows compatible, and include preloaded bonus Mimory™ content. Learn more at www.mimoco.com.

David Horvath & Sun-Min Kim created the first Uglydolls as hand-sewn plush toys in 2001. Since the inception of the first Uglydoll character, Wage, who David drew on a love letter to Sun-Min, Uglydoll has grown into an entire universe of characters, stories, and products for all ages.

The Uglydoll brand was launched in 2002 by Pretty Ugly, LLC with offices in Los Angeles and Edison, NJ. The brand is distinguished by David & Sun-Min’s unique aesthetic and voice defining ‘ugly’ as distinctive, different, and good. The award-winning Uglydoll characters appear in a variety of toys, books, apparel, and other licensed products that are available in thousands of stores, worldwide. In its first ten years, Pretty Ugly has produced and sold millions of Uglydoll items.