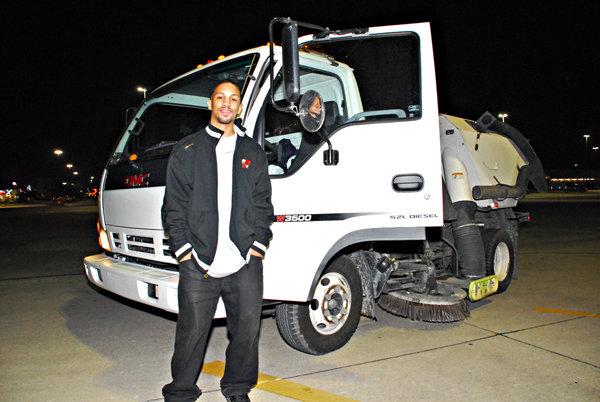 — Jerome Boykin, Jr., 30, survived one of the most devastating natural disasters in U.S. history, Hurricane Katrina. Now, the owner of JB Sweeping Company, a million dollar sweeping company, he has created AfterKatrina.net to share a short story inspired by his and other survivors’ firsthand experience. With this inspiring tale of survival, determination and overcoming the greatest obstacles, Boykin hopes to inspire others to reach high and to never give up on their dreams.

“That’s when it struck me that we have been forgotten in the lost city of New Orleans,” says JB, the narrator of “Rags To Riches: A Story of Hurricane Katrina Survival.” Giving up and dying was not an option for JB and his sister Ceira and brother Brandon in 2005 during Hurricane Katrina. They survived for days in an attic, believing their father had already drown in the house. Their only means of survival was snack chips, one bottle of water and the thin light of a dying flashlight. The close-knit siblings wondered if they would ever see their family — or their city — in one piece again.

New Orleans is a community famous for its French Creole architecture, Mardi Gras, blackened catfish, and, of course, jazz. It was originally settled on the natural levees or high ground, along the Mississippi River. According to National Geographic, in 2005, storm surge from Hurricane Katrina caused catastrophic failure of the federally designed and built levees, flooding 80% of the city.

“I see an axe cutting through our roof and now we start to celebrate because finally we are getting rescued,” JB says, on AfterKatrina.net.

Unfortunately, being relieved from hiding in the safety of an unbearably hot, dark attic was the highpoint of a strife-filled journey to come. Accounts of being shot at, jumped by neighborhood rivals, robbed at gunpoint, and finally fleeing with a mentor who would become like a mother, fill out this jaw-dropping tale.

“It’s my birthday. I just turned 23 and we are still at the convention center living like animals without any assistance from the city or state. Suddenly I saw lots of buses pull up in front of the Convention Center.” JB says.

With the wreckage all around, but a strong will to overcome this tragedy, JB applies for a bank loan. With the help of his mentor and the advance from the bank, he is entrusted with the opportunity to purchase a $75,000 sweeper truck, and sign a lucrative contract to sweep Wal-Mart parking lots.

Writes Boykin, Jr., “JB Sweeping became an instant hit. I was even getting phone calls from people outside of New Orleans.” He continues, “I was making over $35,000 per month. Not bad for a homeless guy who lost everything to Katrina.”

Inspired, in part, by Jerome Boykin, Jr.’s true life experience, he has turned this calamitous tragedy into a humanitarian opportunity. He hopes to inspire people across the globe with this story of luck, tenacity and faith, detailed on AfterKatrina.net.

“I will fight and die for you,” JB says to his brother and sister, before being separated for weeks, in the aftermath of Hurricane Katrina. Luckily, he didn’t have to.

In 2006, Louisiana voters adopted an amendment to the state’s constitution to dedicate all revenues from off-shore drilling to restore Louisiana’s eroding coast line. Congress has allocated $7 billion to bolster New Orleans’ flood protection.

Family owned and operated JB Sweeping Company has serviced New Orleans and its surrounding communities since 2005. Jerome Boykin, Jr. continues his work as an entrepreneur, with a successful real estate firm. He’s landed on the pages and covers of Inc. Magazine, Black Enterprise, and others.