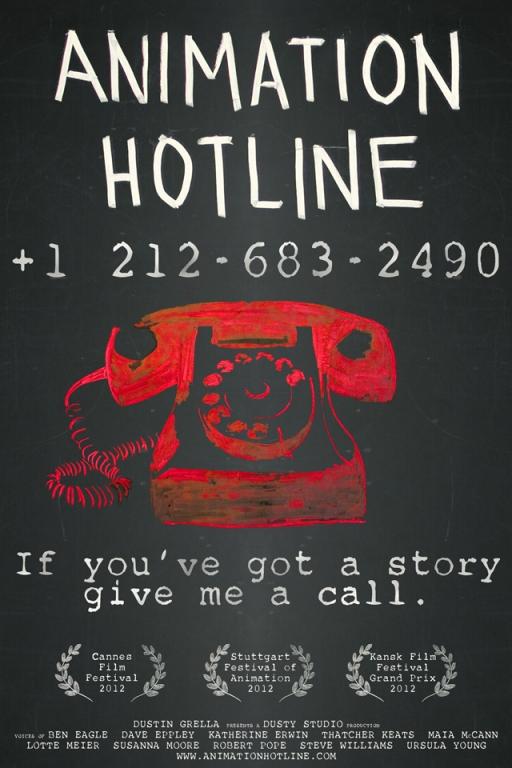 Animator Dustin Grella of Dusty Studio, New York will premiere his latest short Animation Hotline as a part of the Short Competition at the largest animation festival in North America

After showcasing Animation Hotline at the prestigious Cannes Film Festival earlier in May 2012, Dustin Grella will make it’s premiere in Canada on September 20th at the largest animation festival in North America. The talented animator Dustin Grella spearheads Dusty Studio. He is also the brainchild behind the short film – Animation Hotline that is a series of animations where Grella used crowd-sourced voicemail messages to create content. “I really enjoy this project because most of the time I am struggling to come up with creative ideas for a film, and with the Animation Hotline anyone with a telephone can call and leave their story. It’s animated democracy,” adds Grella.

The Short is a part of the Short Competition 2.

Dustin Grella is an animator and documentary filmmaker whose work attempts to glean glimpses of colorful insight into the seemingly mundane. His work has screened at the Cannes Film Festival, Margaret Mead Film Festival, and won the Walt Disney Award at the Ottawa International Animation Festival in 2010. His film “Prayers for Peace” screened at almost two hundred festivals worldwide and won over forty awards. He has written and mailed himself a letter every day for the past ten years and has more than 3650 sealed letters neatly filed and categorized. He is currently in production of the Animation Hotline, a series of micro-animations using crowd-sourced voicemail messages for content.

Starting on September 19th, Ottawa will once again become the epicenter of the Animation industry for five days. Downtown Ottawa will host screenings of some of the finest works of animation from all around the world. Screening venues include the ByTowne Cinema, National Gallery of Canada, Empire Theatres Rideau Centre and Arts Court Theatre. Cartoon fans, animation lovers, art lovers, film buffs and the likes will throng the festival. 2012 will mark as Ottawa International Animation Festival’s 36th year.

Cloud 21 PR is a well-established public relations agency based in Los Angeles, USA with its associates worldwide. At Cloud 21 PR, we create tailor made campaigns for Films, Fashion, Beauty and Entertainment, which promote uniqueness. We also have a stellar Social Media team to further enhance the publicity for your project and increase engagement and audience.