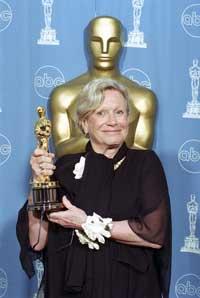 Special Guests include Ann Roth, Nathan Lane, and Mike Nichols, the event will be hosted by CNN’s Alina Cho

With six decades in the film industry and over 100 film credits to her name, legendary costume designer Ann Roth has earned numerous accolades for her diverse career, including an Oscar® for “The English Patient” (1996). Well-known for the depth of her creative vision and her rigorous attention to detail, Roth has designed costumes for a wide variety of genres and historical periods, with films as varied as “The Day of the Locust” (1975), “Hair” (1979), “The World According to Garp” (1982), “The Birdcage” (1996), “The Hours” (2002) and “Julie & Julia” (2009).

Roth is noted for her ability to collaborate with actors and directors in creating indelible characters, and has worked repeatedly with such artists as Mike Nichols, Stephen Daldry, Anthony Minghella, Meryl Streep, Jane Fonda, Robin Williams, Nicole Kidman and Daniel Day-Lewis. In addition to her four Academy Award nominations, Roth has received four Tony Award® nominations for her costume designs for the stage (most recently, for her work on The Book of Mormon) and three Emmy Award® nominations (including her work on the miniseries “Mildred Pierce”). This special event will be both a celebration of Roth’s career and an examination of her work and craft, featuring film clips and in-depth discussions of her creative process.


“Ann’s work has helped bring some of our most iconic movie characters to life,” said Academy CEO Dawn Hudson. “She’s a beloved artist whose work continues to inspire all of us.”

“We are honored that in our festival’s anniversary year we are able to recognize and salute such an extraordinary woman as Ann Roth,” said Executive Director Karen Arikian. “She epitomizes the inspirational creative talent that we have endeavored to present to our audiences at HIFF for the last 20 years.”

“It is, of course, a tremendous honor to be recognized for one’s work by one’s peers” said Ann Roth. “I gratefully thank both The Academy Of Motion Picture Arts And Sciences and The Hamptons International Film Festival and I commend the festival on its steely optimism in waiting until 2012 to bestow such an honor on me.”

In celebration of Ms. Roth’s career, a selection of her original sketches and renderings will be exhibited during the week of the festival. The exhibition will feature hand-drawn works created and curated by Ms. Roth.

ABOUT THE HAMPTONS INTERNATIONAL FILM FESTIVAL

The Hamptons International Film Festival was founded in 1993 to celebrate independent film &dash; long, short, fiction and documentary &dash; and to introduce a unique, varied spectrum of international films and filmmakers to the public. The Festival is committed to exhibiting films that express fresh voices and differing global perspectives, with the hope that these programs will enlighten audiences, provide invaluable exposure for filmmakers and present inspired entertainment for all. Taking place among the charming seaside historic villages of Long Island’s east end, the Hamptons International Film Festival’s intimate, informal atmosphere makes the festival an ideal destination for cinephiles. The 20th anniversary edition takes place over Columbus Day weekend, October 4th- 8th, 2012.

The Academy of Motion Picture Arts and Sciences is the world’s preeminent movie-related organization, with a membership of more than 6,000 of the most accomplished men and women working in cinema. In addition to the annual Academy Awards–in which the members vote to select the nominees and winners–Academy presents a diverse year-round slate of public programs, exhibitions and events; provides financial support to a wide range of other movie-related organizations and endeavors; acts as a neutral advocate in the advancement of motion picture technology; and, through its Margaret Herrick Library and Academy Film Archive, collects, preserves, restores and provides access to movies and items related to their history. Through these and other activities the Academy serves students, historians, the entertainment industry and people everywhere who love movies.